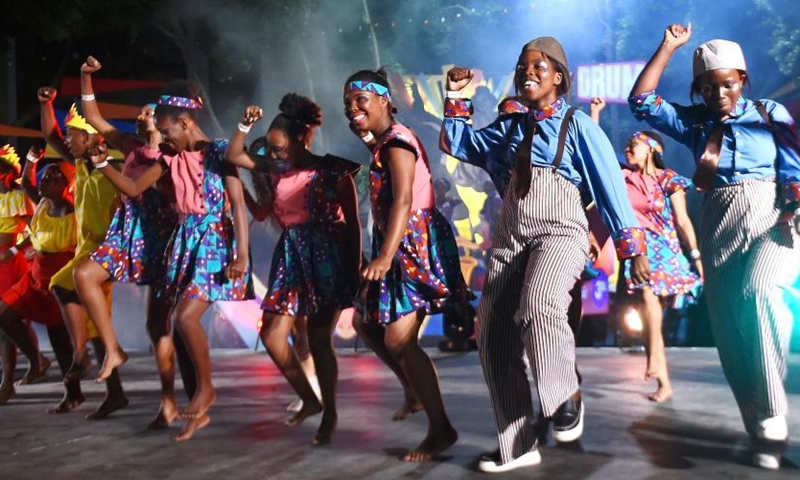 Performers perform during the Cape Town Carnival in Cape Town, South Africa, March 19, 2022. The annual Cape Town Carnival returned to the city Saturday in a new form after a two-year break due to COVID-19, while it maintained a tradition of including performers from the Chinese community and many other groups. (Photo: Xinhua)

South African President Cyril Ramaphosa on Monday announced that all COVID-19 pandemic legal restrictions would end at midnight, declaring it was time to resume growing the economy.

Ramaphosa said his country, which is the hardest hit on the continent, has seen death rates plunge from an average daily high of 420 in July 2021 to just 12 in the past week.

Government "decided to terminate the national state of disaster with effect from midnight tonight" which has been in place since March 15, 2020, he said in a televised address.

"We are hopeful that the worst is behind us, and we are confident that there are only better days ahead."

South Africa's already struggling economy was worsened by the pandemic, with unemployment rate rising to a record 35.3 percent during the last three months of 2021.

"Although the pandemic is not over, and although we continue to remain cautious, we can be confident that we are in a better position now than we have been at any other time over the last 750 days," said Ramaphosa.

However, some "transitional" measures such as mask-wearing in indoor spaces will remain in place for the next 30 days.

South Africa is the continent's most infected, counting more than 3.7 million coronavirus cases or more than 30 percent of Africa's over 11.3 million cases.

So far 100,052 COVID-19-related deaths have been recorded, but researchers say the actual fatalities could be triple the reported figures.