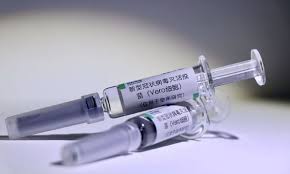 "In addition to the 1 million Covishield doses we received today, we expect another 500,000 doses from the Serum Institute of India to arrive later in February," he said. "We have secured 12 million doses in total from the global COVAX facility, which has indicated that it will release approximately 2 million doses by March."

Ramaphosa also said that a further 9 million doses would come from Johnson & Johnson, which has contracted Aspen, one of major pharmaceutical companies in South Africa, to manufacture these vaccines in the country.

"In addition, Pfizer has committed 20 million vaccine doses, commencing delivery in the second quarter," he noted.

He said the state's goal was to secure enough doses to achieve "herd immunity." The goal will be reached once around 67 percent of South Africans, which is about 40 million people, are immune.

With new infections and hospital admissions plummeting daily, Ramaphosa said some restrictions under lockdown level three would be eased.

"The hours of the curfew will now be from 11 p.m. to 4 a.m.," he said, adding that liquor traders would be permitted to sell alcohol again while public spaces such as beaches, rivers and parks are opened.