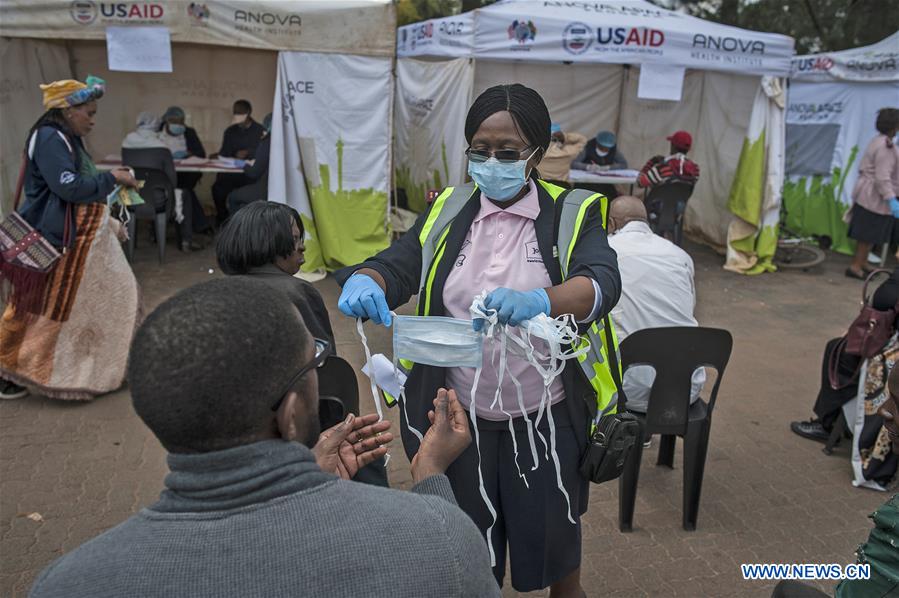 A nurse gives a mask to a citizen before the COVID-19 testing in Johannesburg, South Africa, April 8, 2020. (Photo: Xinhua)

JOHANNESBURG, April 9 (Xinhua) -- South African President Cyril Ramaphosa on Thursday announced that the country's lockdown aimed at stemming the spread of COVID-19 would be extended for another two weeks.

South Africa has been under a 21-day lockdown for two weeks already.

Addressing the nation on national television, the president said he was aware of the impact the restrictions on the economy and citizens but the extension decision was not taken lightly.

"After careful consideration of the available evidence, the National Coronavirus Command Council has decided to extend the nation-wide lockdown by a further two weeks beyond the initial 21 days," he said.

The president said since the lockdown came into effect, the rate at which new cases have been identified here in South Africa has slowed significantly, from 1,170 on March 27 to 1,934 on April 9.

"While it is too early to make a definitive analysis of the progression of the disease in South Africa, there is sufficient evidence to show that the lockdown is working," he said.

During the lockdown, citizens are only allowed to go out to purchase essentials like food, medicine and visit banks. Only essential businesses are open.

Ramaphosa said the cabinet would be looking at certain measures that would allow certain sectors of the economy to be operational again.

"We will use the coming days to evaluate how we will embark on risk-adjusted measures that can enable a phased recovery of the economy, allowing the return to operation of certain sectors under strictly controlled conditions," he said.

The president, his deputy and the ministers would also be taking a "one third cut in their salaries for the next three months." This portion of their salaries will be donated to the Solidarity Fund which was established to unite the nation in action against the COVID-19 crisis.