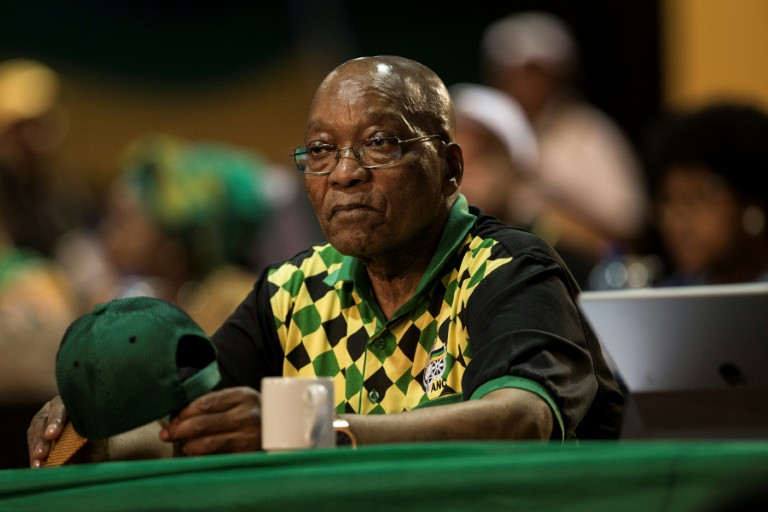 Zuma and his associates have been dogged by allegations of corruption and abuse of power. Photo: AFP

South Africa's graft-tainted president Jacob Zuma on Tuesday announced a probe into corruption at the highest levels of the state after parliament indicated it would this week deliberate procedures for impeachment.

Last month, the North Gauteng High Court ordered Zuma to appoint a judicial inquiry within 30 days to investigate graft allegations that have dogged him and his associates in recent years.

It also ordered Zuma to personally bear the litigation costs.

The move also comes days after the Constitutional Court ruled that parliament had failed to hold Zuma accountable for using public money for private home upgrades.

In 2016 a damning report questioned Zuma's dealings with the Guptas, a wealthy family of Indian origin, who allegedly were granted influence over his cabinet appointments.

In power since 2009, Zuma stepped down in December as president of the ruling African National Congress (ANC) party after a 10 year term marked by numerous court judgements against him.

"The allegations that the state has been wrestled out of the hands of its real owner‚ the people of South Africa‚ is of paramount importance and are therefore deserving of finality and certainty‚" Zuma said in a statement.

"The matter cannot wait any longer," he said, adding: "I have decided to appoint a commission of inquiry."

He said further delays in appointing the commission would make the public doubt the government's commitment to dismantling "all forms of corruption" and entrench "the perception" that the state has been captured by private interests.

In 2014 Zuma had failed to abide by recommendations made by the country's anti-corruption watchdog over $15 million of taxpayer-funded refurbishments at his personal home in the eastern KwaZulu-Natal province.

After the Constitutional Court found against him, he eventually reimbursed the equivalent of around $500,000 for non-security-related work at his homestead, a sum set by the treasury.

Until recently, the ANC has steadfastly supported Zuma. But, a year out from the expiry of his second term in office, corruption allegations have tarnished his image and eroded his support base.

Last month also saw him suffer a blow when his vice-president Cyril Ramaphosa, who campaigned on an anti-corruption ticket, was elected ANC president after seeing off Zuma's former wife Nkosazana Dlamini-Zuma.

Ramaphosa is set to distance himself from Zuma as the ANC seeks to retain its absolute majority in next year's general elections even if the latter still retains a constituency of support within the movement after 10 years as its leader.

Before taking office, Zuma dismayed the nation during his 2006 rape trial when he told the court he had showered after having unprotected sex with his young HIV-positive accuser to avoid, he said, contracting the virus.

The claim incensed safe-sex campaigners -- not least because Zuma was head of the country's national AIDS council at the time.

Zuma was acquitted of rape but is often mocked in newspaper cartoons and depicted with a shower nozzle sprouting from his bald head.