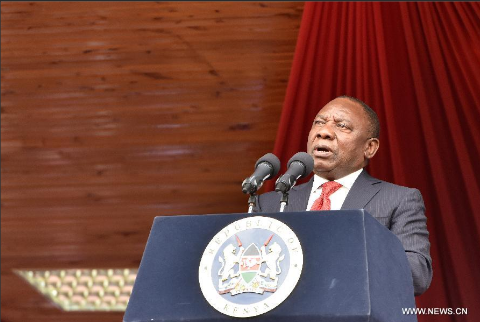 President Cyril Ramaphosa on Thursday suspended two senior officials at the National Prosecuting Authority (NPA) pending the outcome of an inquiry into their fitness to hold office.

This decision followed an opportunity Ramaphosa had afforded Jiba and Mrwebi to make submissions in August why they should not be suspended pending this inquiry, according to presidential spokesperson Khusela Diko.

Ramaphosa has also decided to suspend, with immediate effect, Jiba and Mrwebi on full pay pending finalization of the inquiry, Diko said.

In his letters to Jiba and Mrwebi, Ramaphosa said he has taken into account the serious nature of allegations that they are unfit to hold such high positions, where the work of the country's criminal justice system is central to the critical and pressing matter of all prosecutions, especially prosecution of corruption cases and safeguard of the public purse.

"You hold a senior position with influence over a large swathe of the NPA. It is the interest of the NPA's image as a whole that I consider here, and of the integrity of an enquiry that must result in the clearest and most convincing conclusions about the integrity, and sound leadership of the NPA," Ramaphosa said.

The inquiry will not take the form of a judicial inquiry or a commission of inquiry; instead it is an internal process that is expected to advise the president on the fitness of the two senior officials to hold high office in the NPA, according to the Presidency.

The NPA, a critical law enforcement institution, has been devoid of an effective leadership since August this year when the Constitutional Court declared invalid and unconstitutional the appointment of Shaun Abrahams as head of the NPA by then president Jacob Zuma.

Abrahams has been accused of inaction to prosecute those involved in alleged corruption scandals, including Zuma.

The court directed Ramaphosa to appoint a new NPA head within 90 days.

Ramaphosa has appointed an advisory panel to identify and conduct interviews with individuals worthy of consideration to occupy the position of the NPA head.

The panel convened for the first time earlier this week and is expected to submit shortlisted names to Ramaphosa by December 7 this year.