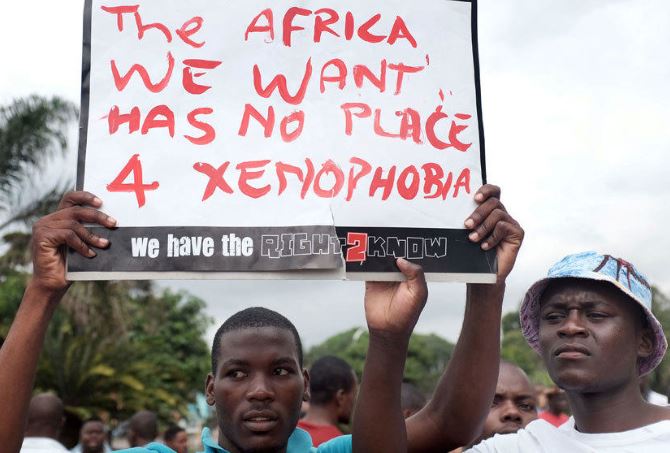 JOHANNESBURG, Sept. 14 (Xinhua) -- South Africans from all walks of life on Saturday joined migrants to march against the attacks on foreigners.

Since last month, there has been some attacks and looting of shops owned by foreigners. A total of 12 people have been killed including South Africans.

Gabriel Hertis, coordinator for social cohesion from the Africa Diaspora Forum, said they are deeply concerned about the attack, killing and looting.

"We stand together with South Africans in fighting xenophobia and crimes. We played a role in South Africa's development and do not see reason why we should stop now. We are getting opportunities for our families and also contributing to the development of South Africa," said Hertis.

Hertis who is from Rwanda told Xinhua that they have programs to hold dialogue with South Africans to bring about social cohesion by dressing burning issues.

South African singer Sho Madjozi entertained people during the march. She called on the people to stop killing each other and confront the common enemy together.

He said, "We are here to raise consciousness among South Africans to accept that migration is a global phenomenon. We must live together peacefully as Africans. Migrants should also respect the law of South Africa. We should work towards the development of South Africa."

The General Industrial Workers Union of South Africa (GIWUSA) President Mametlo Sibiya said the people who were plundering and looting shops do not represent all South Africans.

"Any crime should be addressed regardless of any nationality. People inciting the violence should be dealt with according to the law. The government should bring relief for the victims of xenophobia." Sibiya said.

Sibiya stated that migrants and South Africans should confront challenges such as unemployment, crime and service delivery together.

The marchers handed over a petition to the Gauteng provincial government. They demanded that the xenophobic attacks end with government taking firm action against perpetrators. They also called for the leaders to speak against xenophobia.

A total of 30 organizations attended the march.