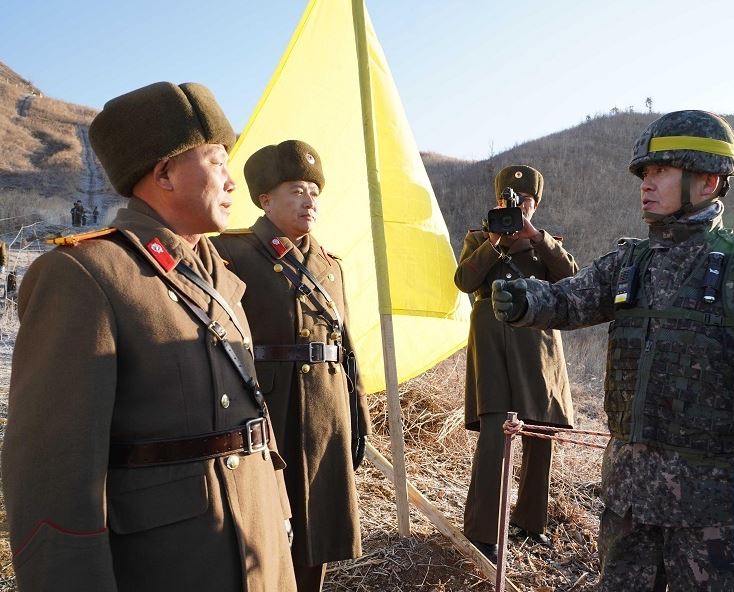 In this handout photo provided by South Korea's Ministry of National Defence, soldiers of South Korea and the Democratic People's Republic of Korea (DPRK) greet each other within the Demilitarized Zone (DMZ), on Dec. 12, 2018. (Photo: Xinhua)

SEOUL, Jan. 15 (Xinhua) -- South Korea's military deleted its reference to the Democratic People's Republic of Korea (DPRK) as an "enemy" in the latest defense white paper amid a rising peace mood on the Korean Peninsula.

The reference to the DPRK government and military as an enemy of South Korea was deleted from the 2018 defense white paper, which was published Tuesday by Seoul's defense ministry.

The term of enemy first appeared in the 1995 defense white paper, before disappearing in 2004 amid a reconciliatory mood on the peninsula. The term re-appeared in the 2010 white paper on escalating military tensions between the two Koreas.

Instead of the deletion, the 2018 paper, which has been published biennially since 1967, said South Korea's military regards forces threatening and infringing upon the country's sovereignty, territory, people and assets as an enemy.

The paper noted that though South Korea and the DPRK repeated confrontation and reconciliation in the past, the two Koreas held summit meetings three times in 2018 while the first-ever DPRK-US summit was held last year.

It said those summit meetings created a new security environment to denuclearize the Korean Peninsula and build peace.

The military authorities of the two sides set up buffer zones in the air, waters and land near the inter-Korean border, while disarming the Joint Security Area (JSA), where armed soldiers of the two Koreas stood face-to-face in the past, and destroying some guard posts inside the demilitarized zone (DMZ) on a trial basis.

Adding to the inter-Korean peace mood, the DPRK leader and US President Donald Trump held the first-ever DPRK-US summit in Singapore in June last year, agreeing to complete denuclearization of the peninsula and normalized relations between Pyongyang and Washington.

The updated version was the first South Korean defense white paper published under the Moon government, which was inaugurated in May 2017.

The white paper said the DPRK's weapons of mass destruction (WMD) remained a threat to peace and stability on the peninsula, noting that the South Korean military would support efforts to denuclearize the peninsula and build permanent peace while making thorough preparations for all scenarios.

The paper estimated that the DPRK owned 50 kilograms of weapons-grade plutonium and a "considerable" amount of highly enriched uranium, unchanged from the estimate in the 2016 white paper.

It said the DPRK seemed to have advanced its capability of miniaturizing nuclear warheads to a "considerable" level. Pyongyang conducted six nuclear tests since 2006, including the latest in September 2017.

Regarding delivery vehicles, the paper estimated that the DPRK developed or possessed 14 types of ballistic missiles of various ranges, including the Hwasong-15 intercontinental ballistic missile (ICBM) of which a test launch was staged in November 2017.

Meanwhile, the South Korean military planned to reduce the number of active-duty troops to 500,000 by 2022 from the current 599,000. The number of DPRK soldiers was estimated at 1.28 million, according to the white paper.

The white paper said South Korea planned to hold arms-reduction talks with the DPRK by stages according to the peace-building process on the peninsula and the military trust-building process between the two Koreas.

The trust-building measures between the two Koreas would include the transformation of the DMZ, which has left the peninsula divided since the 1950-53 Korean War ended with armistice, into a peace zone, and the western sea boundary into a maritime peace zone, as well as the launch of direct phone lines between the military authorities of the two sides.