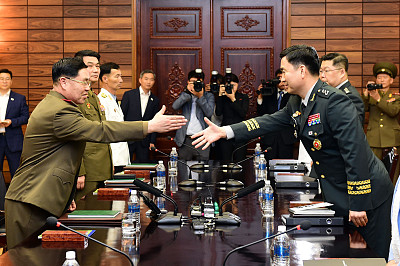 The agreement came after delegates from South Korea and the DPRK, led by colonel-level military officers, held a working-level contact in the South Korean side of the inter-Korean transit office in the western region, according to Seoul's defense ministry.

The ministry said the two sides shared a view that it would be more urgent than anything to restore communication lines to implement the agreement on military affairs under the Panmunjom Declaration.
The Panmunjom Declaration was signed by South Korean President Moon Jae-in and top DPRK leader Kim Jong Un after holding their first summit meeting on April 27 at the border village of Panmunjom.
The military delegates from Seoul and Pyongyang agreed to restore military communications channels in the eastern and western regions as soon as possible.
They agreed to take measures rapidly to normalize the military hotlines in the western region first, while continuing to consult on the restoration of the eastern hotlines, which had been completely destroyed due to forest fire.
Through the exchange of letters, the two sides would continue to exchange opinion on other military issues such as schedule for further military talks, the Seoul ministry said.