SEOUL, Oct. 26 (Xinhua) -- South Korea and the Democratic People's Republic of Korea (DPRK) agreed Friday to pull out 11 guard posts at the border area on a trial basis by late November. 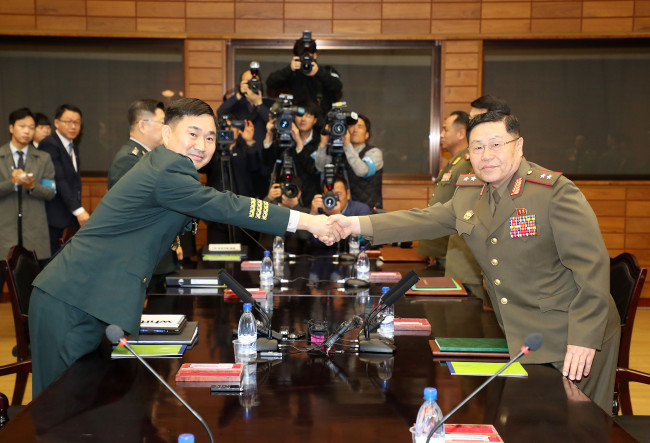 Officials from the DPRK and ROK hold general-grade military talks at the border truce village of Panmunjom on October 26, 2018. (Photos: VCG)

The agreement was reached after a general-grade military dialogue was held earlier in the day at Tongilgak, a DPRK building in the truce village of Panmunjom.

The military delegations of the two sides adopted a joint statement after the talks, which said South Korea and the DPRK agreed to withdraw troops and equipment and completely destroy 11 guard posts by the end of November.

Seoul and Pyongyang already agreed in the past military dialogue to pull out guard posts on a trial basis from the Demilitarized Zone (DMZ), which has left the Korean Peninsula divided since the 1950-1953 Korean War ended with armistice.

Through a joint verification in December, the two Koreas agreed to wrap up the guard post withdrawal by the end of this year, according to the joint statement.

Based on the result of the pilot pullout, the two sides agreed to make working-level discussions for the withdrawal of all guard posts in the inter-Korean border area, the statement said.

The pullout would be a part of efforts to implement the comprehensive military agreement, which was signed by defense chiefs of the two Koreas during the Pyongyang summit last month between South Korean President Moon Jae-in and top DPRK leader Kim Jong-un.

Under the military agreement, the two sides agreed to stop all hostile acts in areas along the heavily armed border by setting up air, ground and maritime buffer zones.

The joint statement said the two sides confirmed the stop of all hostile acts on land and in waters and the air from Nov. 1 as agreed upon.

On Thursday, the militaries of the two Koreas completed the withdrawal of weapons and guard posts from the Joint Security Area (JSA), also called Panmunjom, in a bid to reduce tensions in the border area.

The disarmament of the JSA was also agreed upon under the comprehensive military agreement. South Korea and the DPRK would station a patrol of 35 non-armed soldiers in the JSA for the sentry duty.

The two sides also agreed to conduct a joint research on the Han River estuary in early November to allow civilian ships to freely navigate in the estuary, where civilian access has been restricted, according to the statement.

To increase communications between the military authorities, Seoul and Pyongyang agreed to rapidly form a joint military committee.

The two Koreas' confirmed works to remove landmines and build the road inside the DMZ were under way to restore the remains of fallen soldiers killed during the three-year Korean War. The two sides planned to recover the remains from April next year.