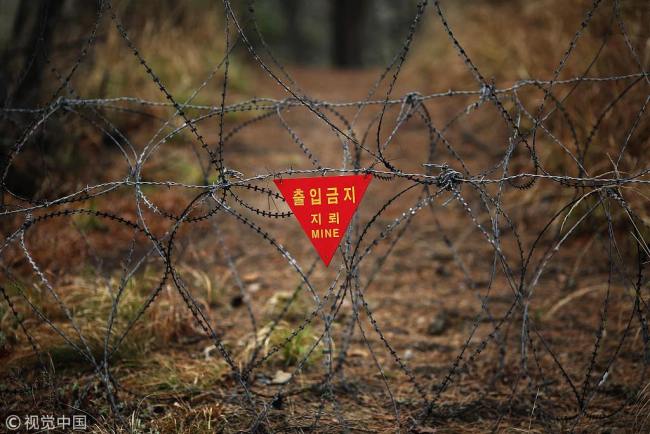 A warning sign hangs on razor wire on the island of Baengnyeong, which lies on the South Korean side of the Northern Limit Line (NLL), in the Yellow Sea April 12, 2014. [File photo: VCG]

The militaries of the two Koreas started removing landmines in the Joint Security Area (JSA) inside the Demilitarized Zone (DMZ), which has left the Korean Peninsula divided since the 1950-53 Korean War ended with armistice.

The two sides agreed to disarm the JSA under the military agreement, which was signed by defense chiefs during the Pyongyang summit in September between South Korean President Moon Jae-in and top DPRK leader Kim Jong Un.

The removal works would last for 20 days. The two Koreas and the UN Command, which oversees activities in the DMZ, would reportedly launch consultations on how to operate troops in the JSA after the disarmament.

Troops in the JSA have been banned from crossing the military demarcation line (MDL) since the 1976 incident, in which DPRK soldiers axed two U.S. soldiers. Before the incident, the troops were allowed to freely move inside the JSA.

The militaries of the two Koreas also launched the landmine removal works in the eastern border areas in Cheorwon, Gangwon province, to prepare for the joint excavation of the Korean War remains.

The landmine removal works would last for 60 days. The joint excavation would kick off in April next year.