WORLD S.Korea, DPRK stop all hostile acts in border area as agreed upon in Pyongyang summit

S.Korea, DPRK stop all hostile acts in border area as agreed upon in Pyongyang summit 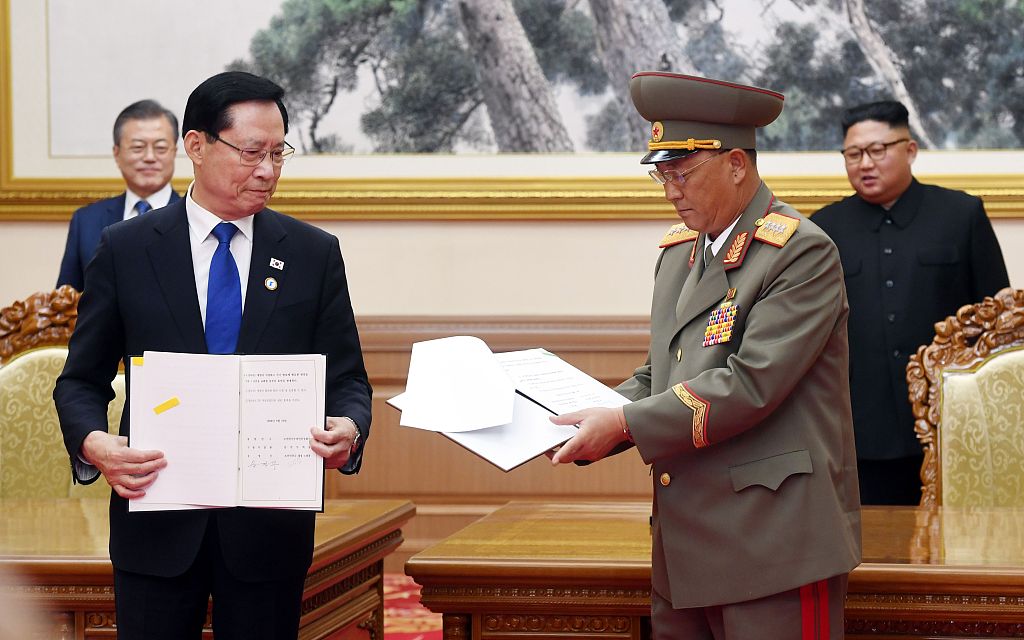 SEOUL, Nov. 1 (Xinhua) -- South Korea and the Democratic People's Republic of Korea (DPRK) on Thursday stopped all hostile acts in border area as agreed upon in the military agreement, signed by defense chiefs of the two Koreas during the Pyongyang summit in September, according to Seoul's defense ministry.

The ministry said in a press release that the military authorities of the two Koreas would stop all hostile acts against each other on land, in waters and the air as of 12 a.m. local time Thursday (1500 GMT Wednesday) in accordance with the comprehensive military agreement.

The military agreement was signed on Sept. 19 in Pyongyang on the sidelines of the third summit between South Korean President Moon Jae-in and top DRRK leader Kim Jong-un.

Under the agreement, the two sides would stop the live-fire artillery drills and the field maneuvering exercises by regiment or bigger units within the 5-km border areas from the military demarcation line (MDL) dividing the Korean Peninsula.

The operation of drones, helicopters and other aircraft would be banned over the border areas up to 40 km away from the MDL.

The live-fire coastline artillery drills and the maritime maneuvering exercises would be prohibited in maritime buffer zones in the eastern and western waters.

The Seoul ministry said the DPRK side officially expressed its willingness to implement the military agreement during the general-grade military talks on Oct. 26.

The DPRK military was implementing the agreement given the recent closure of coastline artilleries in the western waters, according to the Seoul ministry.

Stopping all hostile acts would become an effective action to defuse military tensions and build trust between the two Koreas, and become a meaningful step toward the denuclearization of the Korean Peninsula and the settlement of lasting peace, the ministry added.