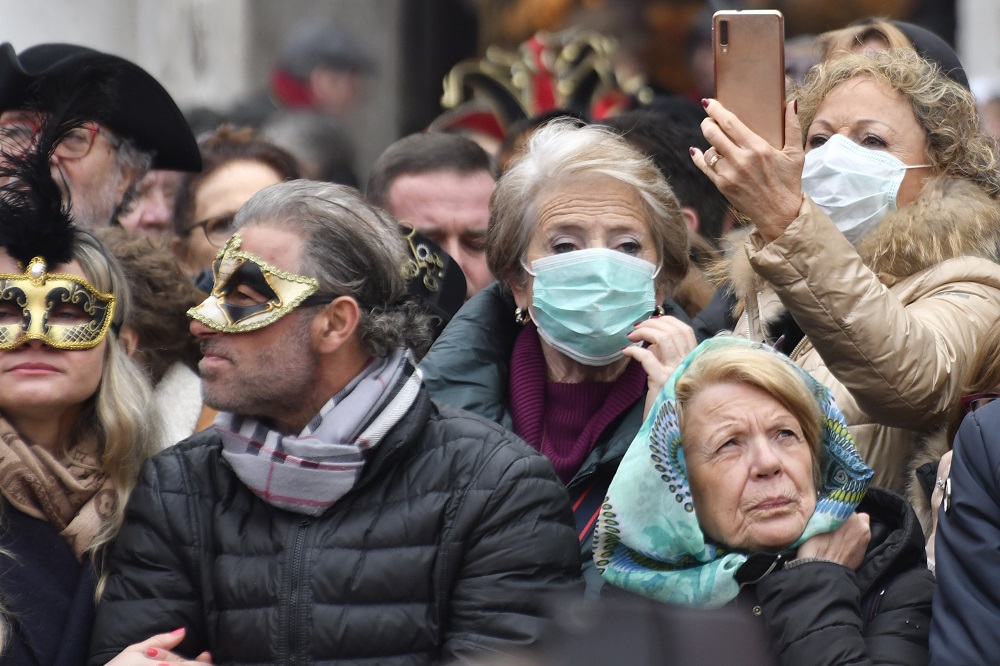 Masks mix with sanitary masks on the last day of the Carnival, as authorities decided to cut it two days shorter due to the coronavirus outbreak, in Venice, on Sunday. (Photo: Agencies)

SEOUL－South Korea confirmed 231 more cases of the novel coronavirus on Monday, raising the total number of infections to 833, while the death toll rose to seven.

The country has seen a rapid surge in the number of cases－adding more than 700 cases in less than a week－since a cluster of infections emerged from a religious sect in the southern city of Daegu.

Most of the country's cases are connected to the Shincheonji Church of Jesus in Daegu, a city of 2.5 million people where most of the country's infections have occurred, the Korea Centers for Disease Control and Prevention said in an earlier statement.

Two more people had died, it added, both of them connected to a second cluster around a hospital, taking the toll to seven.

While officials have expressed hope they could contain the outbreak to the region surrounding Daegu, some media in South Korea voiced signs that the virus may circulate nationwide, pointing to a number of cases in the capital Seoul and elsewhere that weren't immediately traceable.

"In Daegu, the number of new cases that are being confirmed by tests is quite large, and if we fail to effectively stem community transmissions in this area, there would be a large possibility (that the illness) spreads nationwide," South Korean Vice-Health Minister Kim Gang-lip said in Sunday's briefing, saying that the government aims to stabilize Daegu's situation in four weeks.

South Korean President Moon Jae-in on Sunday raised the country's virus alert to the highest "red "level, in a bid to strengthen the government response to the spiraling outbreak.

The government has extended kindergarten and school holidays by one week nationwide and said it will enforce tougher restrictions on group events.

Korean Air said it had suspended all of its flights to Daegu until the end of March due to the novel coronavirus, while Asiana Airlines said it would suspend its Daegu-Jeju route on Tuesday.

South Korea has the third-highest national total of the novel coronavirus cases behind China and Japan. Japan has reported 838 cases as of Monday, including 691 from the Diamond Princess cruise ship docked in Yokohama.

Civil protection officials in Italy said on Monday that 219 people had tested positive for the virus and five people had died in the outbreak, including two elderly men in the northern Lombardy region. It is the highest number of cases outside Asia, and underscores the limits of Italy's prevention protocols, which are the most stringent in Europe.

Venice, which is full of tourists for Carnival events, reported its first two cases, said Veneto Governor Luca Zaia, whose region includes the lagoon city. It wasn't immediately known if the two infected people had participated in Carnival festivities.

As Italy scrambled to check the spread of the virus, authorities announced that all Carnival events had been called off as well as major league soccer matches in the stricken region. Cinemas and theaters were also ordered shuttered, including Milan's legendary La Scala.

The Iranian health ministry said on Monday there were 61 people infected with the virus in the country after reporting its first case last Wednesday.

Iranian President Hassan Rouhani on Sunday issued an order to form a national headquarters to cope with the outbreak of the virus in the country.