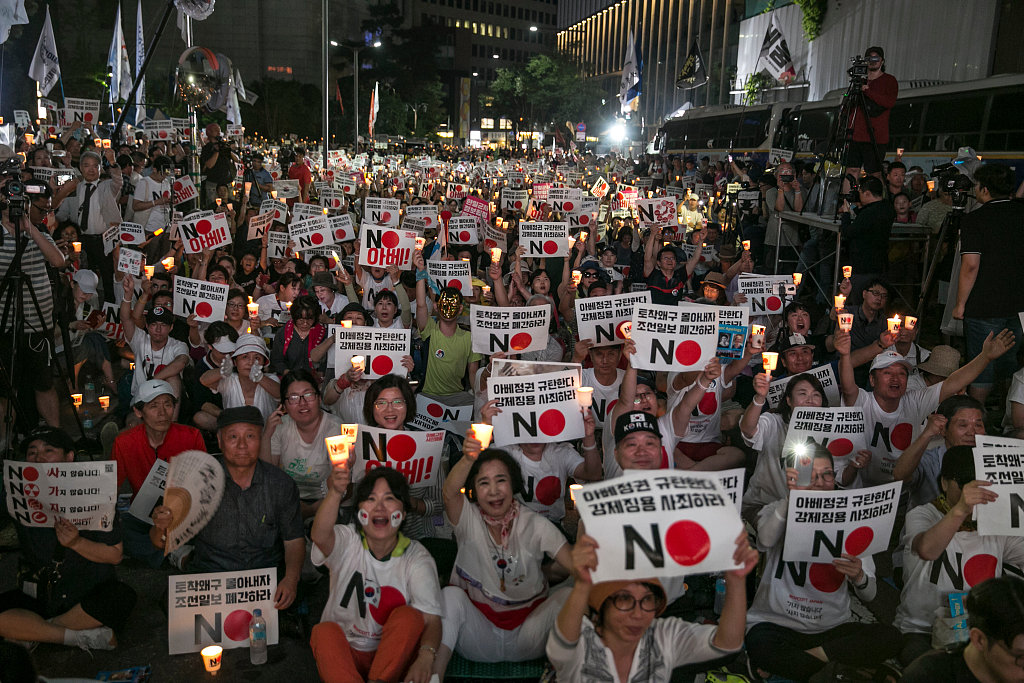 Protesters hold placards reading 'No Abe!' and candles during a demonstration against Japan's removal of South Korea from a list of trusted trading partners in Seoul, South Korea, on Saturday, Aug. 3, 2019. (Photo: VCG)

The Ministry of Trade, Industry and Energy said in a statement that working-level talks between the two sides were held in Seoul on Thursday to prepare for the director general-level dialogue.

After the working-level meeting, South Korea and Japan agreed to hold the director general-level dialogue during the third week of December, or from Dec. 16-20, in Tokyo, the trade ministry noted.

During the director general-level talks, the two sides will exchange opinions on the domestic and external situations relevant to export control.

The two countries agreed to hold preparation talks for the director general-level dialogue in Vienna on Dec. 4.

The Seoul-Tokyo trade talks agreement came after South Korea's decision last Friday to suspend the termination of the General Security of Military Information Agreement (GSOMIA) as long as trade talks with Japan go on normally.

The GSOMIA was signed in November 2016 by South Korea and Japan to share military intelligence on nuclear and missile programs of the Democratic People's Republic of Korea (DPRK).

South Korea decided in August to terminate the GSOMIA as Japan imposed export curbs on South Korea for what it called security reasons.

Japan tightened regulations in July on its export to South Korea of three materials, vital to produce memory chips and display panels that are the mainstay of the South Korean export.

South Korea believed that Japan's export restrictions came in protest of the South Korean top court's rulings that ordered some of Japanese firms to compensate the South Korean victims who were forced into hard labor without pay during the 1910-45 Japanese colonization of the Korean Peninsula.