South Korea's president has put his country on its highest alert for infectious diseases, saying Sunday that officials should take "unprecedented, powerful" steps to fight a viral outbreak. 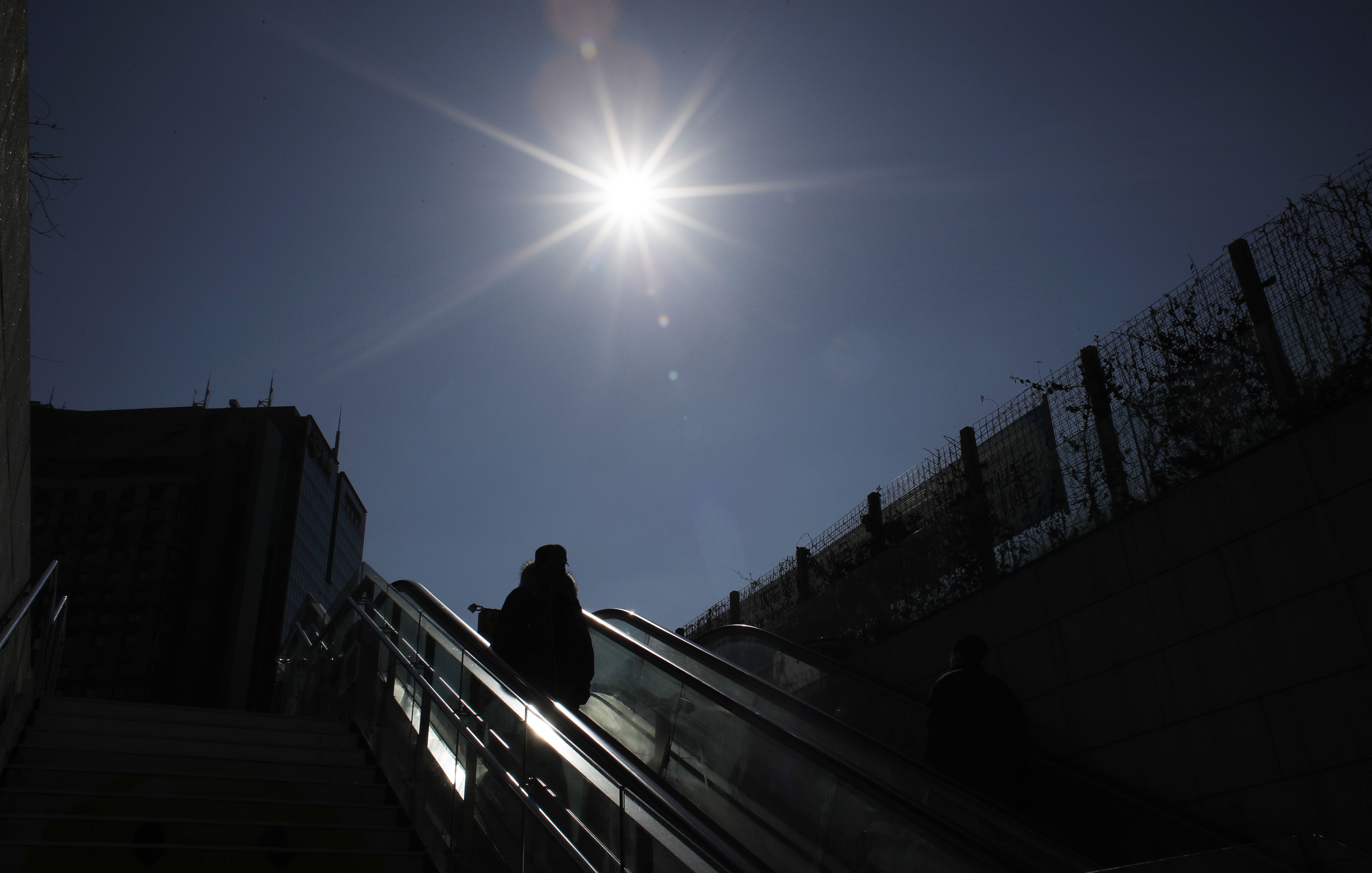 President Moon Jae-in made the comments at the start of a government meeting as South Korean authorities reported 123 more cases on Sunday, raising the country's total to 556 with five deaths.

Moon said his government had increased its anti-virus alert level by one notch to "Red," the highest level. The step was last taken in 2009 to guard against a novel influenza outbreak that killed more than 260 people in South Korea. Under the highest alert level, authorities could order the temporary closure of schools and reduce the operation of public transportation and flights to and from South Korea.

Moon said that the outbreak "has reached a crucial watershed," and that the next few days will be "critical." "We shouldn't be bound by regulations and hesitate to take unprecedented, powerful measures," he said.

South Korea and China both reported a rise in new virus cases on Sunday and a diplomatic row erupted after Israel turned back a South Korean airliner, underscoring fear and tensions over the fast-spreading outbreak.

Some virus clusters have shown no direct link to travel to China. The death toll in Iran climbed to six, the highest outside China, and a dozen towns in northern Italy effectively went into lockdown as authorities tested hundreds of people who came into contact with an estimated 79 confirmed cases there. Two people have died in Italy.

South Korea reported its fifth death from the virus. It said the victim was a woman believed to be 57 years old who was suffering from chronic kidney disease when she became infected with the virus.

The Korea Centers for Disease Control and Prevention said that 113 of the 123 new cases came from the fourth-largest city of Daegu and surrounding areas. Centers chief Jeong Eun-kyeong told reporters that 309 patients, or 55.6% of the country's cases, have been confirmed to have links to a branch of the local Shincheonji church in Daegu, which has become the biggest cluster of viral infections.

She said 534 of the 556 patients have been placed under isolation and that tests were underway on 6,039 other people.

Daegu's first case on Feb. 18 was a church member with no recent record of overseas travel. Officials said she attended church services and visited other places before being diagnosed with the disease, but they still believe it's unlikely that the woman set off the chain of infections.

Earlier Sunday, Daegu Mayor Kwon Yong-jin said there are concerns that the number of those infected in the city could see yet another massive increase because authorities were launching intensive examinations of church members with virus-related symptoms.

Downtown Daegu was mostly deserted with shelves at some supermarkets and stores empty. Many restaurants, bars, real-estate offices and tour agencies have shut down as traffic nosedived and people stayed home, ordering food and supplies online.

Kim Mi-yeon, who opened her cake shop in Daegu on Sunday despite worries about infection, said that she received only one group of customers.

"I'm also worried about being infected but I still opened my shop today to make a living," Kim said by phone. "On weekends, I used to hire five part-time employees but I've recently told all of them not to come. How can I hire them at a time when I have less then 10 customers a day?"

On Saturday night, South Korean Prime Minister Chung Sye-kyun said in a nationally televised address that the virus outbreak had entered "a more grave stage" and repeated the government is making all-out efforts to contain the further spread of the disease. Chung also said his government will sternly deal with any acts that hamper national quarantine efforts.

Other parts of South Korea are also gripped by a frenzy over the outbreak. TV stations air all-day special broadcasts on infections, social media are full of virus-related information and rumors and some sports games were held with no spectators.

On Sunday, a usually crowded express bus terminal in Seoul saw much less visitors, many of them wearing masks.

"I think there is no safe zone so there is nothing we can do other than being more attentive to our own sanitary management," Choung Youn-back, 71, a Seoul resident, said before taking a bus to the southeastern region. "I think (the danger of infection) is the same everywhere, in Seoul or other regions,.

Globally, more than 78,000 people have been infected in 29 countries.

The South Korean flight that landed at Tel Aviv's Ben Gurion airport Saturday evening was taxied away from the allotted terminal while authorities evacuated and quarantined 12 Israelis and returned the rest of the passengers to Seoul, Israeli media reported.

Yonhap news agency cited Seoul's Foreign Ministry as registering a strong protest with the Israeli government. The Foreign Ministry told Israel that no excessive, unreasonable measures should be taken against South Korean nationals, according to the report.

The Foreign Ministry said Sunday that it was closely monitoring the reported incident and providing active consular assistance to South Koreans staying in Israel under close consultations with authorities there. It said it will evacuate South Korean tourists from Israel at an early date if necessary.

According to Yonhap, the plane was returning to South Korea on Sunday afternoon.

South Korea earlier informed Israel that a group of tourists who traveled to Israel and the West Bank for a week this month tested positive for the virus upon returning home. Israeli and Palestinian health authorities asked people who were in close contact with the tourists to quarantine themselves.

Jeong said Sunday that 18 of the 39 South Koreans from the southeastern region who had made a group pilgrimage to sites in Israel had contracted the virus. She said the 21 others were being tested. Forty-one Catholic churches in their neighborhoods halted Sunday Masses and other gatherings.