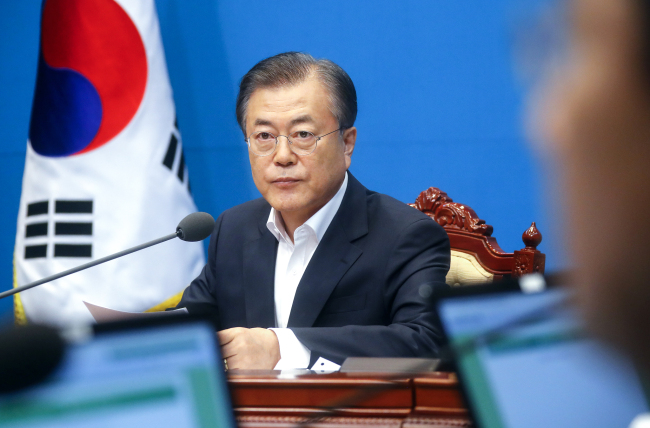 South Korean President Moon Jae-in said Thursday that uncertainty would last over Japan's export curbs on South Korea despite Tokyo's first approval of a chip material to Seoul since its tighter export control of such materials in early July.

Moon said during a meeting of the presidential National Economic Advisory Council that despite the first approval by Japan, what was unchanged was a fact that "uncertainty is still alive."

Moon's comments came after Japan permitted the shipment earlier in the day of extreme ultraviolet (EUV) photoresist to South Korea, according to the presidential Blue House.

It was one of the three materials, on which Japan tightened regulations in early July to curb export to South Korea. The three materials are crucial for the production of memory chips and display panels that are the mainstay of the South Korean export.

On Wednesday, Japan promulgated last week its decision to remove South Korea from its whitelist of trusted trading partners, but it did not impose additional curbs on materials exported to South Korea.

Moon said it needed to see how Japan would act, but he noted that his government had been prepared for the worse-case scenario right after Japan's tighter regulations on the three materials last month.

The president vowed to take Japan's export restrictions as an opportunity to reduce import dependence on Japan and expand the development of homegrown parts and materials, while continuing diplomatic efforts to resolve the trade issue with Japan.

Moon reiterated his position that Japan's action was an "economic retaliation" against the South Korean top court's rulings that ordered some of Japanese companies to compensate the South Korean victims who were forced into hard labor without pay during the 1910-45 Japanese colonization of the Korean Peninsula.