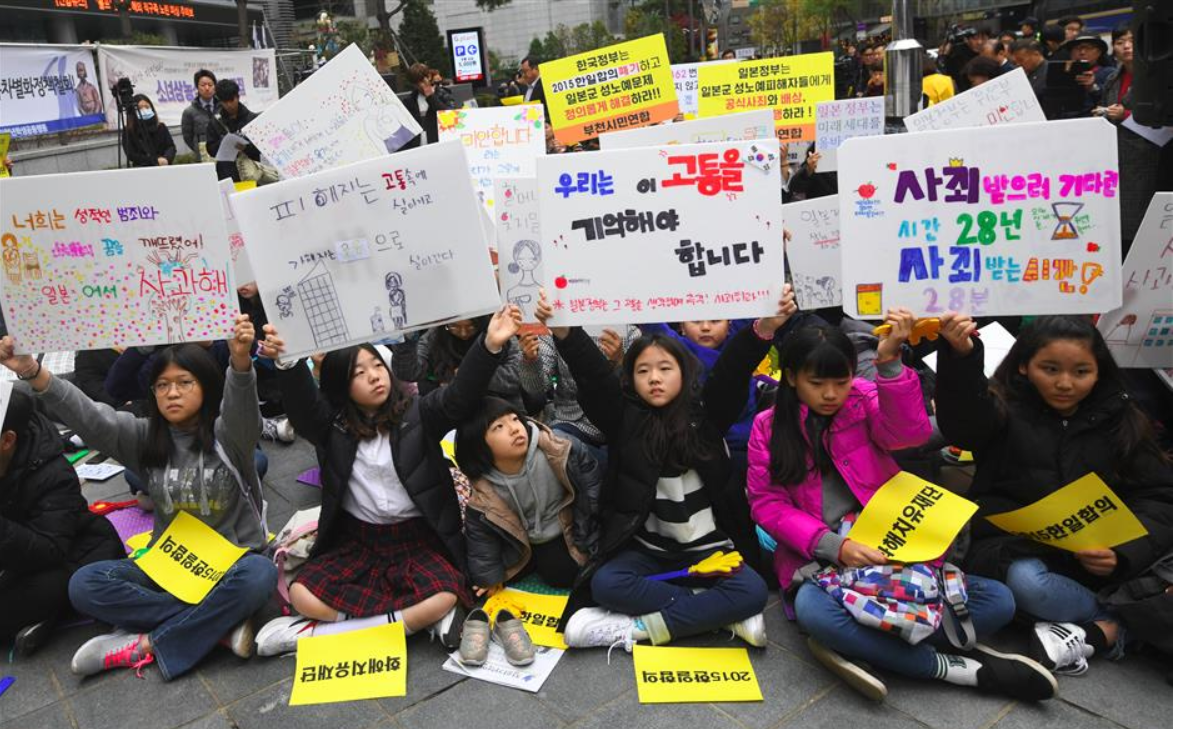 South Korean protesters hold up signs during a weekly anti-Japanese demonstration supporting "comfort women," who served as sex slaves for Japanese soldiers during World War II, in front of the Japanese embassy in Seoul on November 21, 2018. (Photo: AFP)

SEOUL, Nov. 21 (Xinhua) -- South Korea decided on Wednesday to dissolve a Japan-funded foundation for the domestic victims of sex slavery during World War II as it was set up in defiance of the victims and their bereaved families.

The Ministry of Gender Equality and Family, which governs the Reconciliation and Healing Foundation, said it would launch a legal process to close down the foundation, based on the current situations and the review results.

The ministry said it consulted with relevant offices, along with the Foreign Ministry, over ways to handle the foundation and collected various opinions.

The foundation was established in July 2016, with 1 billion yen (8.9 million U.S. dollars) offered by Japan after the then South Korean government of impeached president Park Geun-hye reached a final, irreversible agreement with Japan in December 2015 to settle the wartime sexual enslavement issue in return for the contribution.

Historians say as many as 400,000 women from Asian countries, including from the Korean Peninsula, were forced into sex slavery for Japanese military brothels during WWII. The Korean Peninsula was colonized by the Imperial Japan from 1910 to 1945.

The Moon Jae-in government, which was inaugurated in May 2017, decided to replenish the 1-billion-yen fund with its own budget as the living victims and civic groups supporting the victims protested against the foundation.

The victims demanded the Japanese government's sincere apology and its acknowledgement of legal responsibility for the wartime atrocities.

The Japanese government under Prime Minister Shinzo Abe has refused to do it.

The Reconciliation and Healing Foundation has paid 4.4 billion won (3.9 million U.S. dollars) in compensation to 34 comfort women victims and the bereaved families of 58 late victims.

However, they refused to receive any money from the Japan-funded foundation and called for Japan to sincerely apologize and acknowledge its legal responsibility for the wartime crime against humanities.

The operation of the foundation actually stopped late last year as all of the civilian board members quitted from the fund.

Regarding the remaining fund of the foundation, the ministry said it will collect opinions from the victims and civic groups to handle the fund in a reasonable way.

The Foreign Ministry would reportedly seek to consult with Japan on ways to handle the 1-billion-yen fund. Advocacy groups have demanded returning all the money to Japan.

Jin Sun-mee, minister of gender equality and family, said the ministry will make utmost efforts for policies to recover the honor and dignity of the comfort women victims.

The Seoul decision to close down the Tokyo-funded foundation was forecast to add a strain on the already soured bilateral relations following the South Korean top court's ruling on the wartime forced labor.

The South Korea's highest court ruled in October that Nippon Steel & Sumitomo Metal, a Japanese steel producer, should pay 100 million won (around 88,000 U.S. dollars) per plaintiff in compensation to four South Korean victims for their forced labor during WWII.

Japan protested against the ruling, claiming that the wartime forced labor issue was fully resolved through a 1965 treaty that normalized diplomatic ties between Seoul and Tokyo.