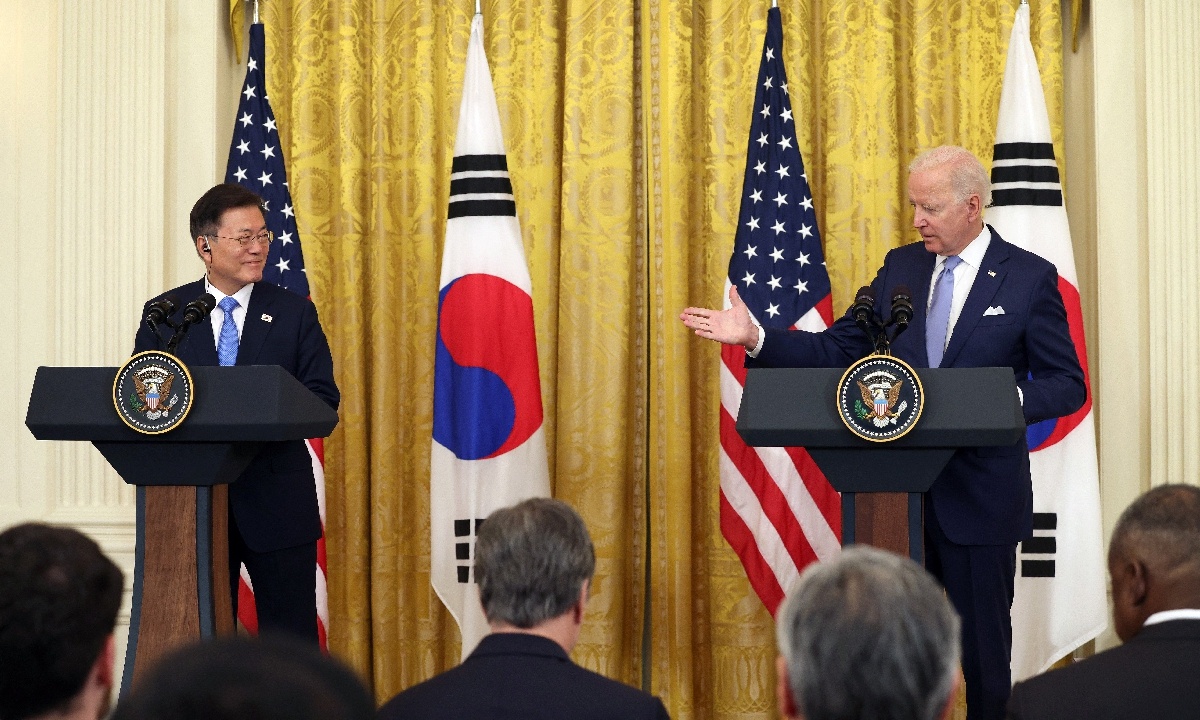 US President Joe Biden (R) and South Korean President Moon Jae-in participate in a joint press conference in the East Room of the White House on May 21, 2021 in Washington, DC. (Photo: AFP)

Chinese experts said that although China understands South Korea after it mentioned the South China Sea and Taiwan Straits in its latest joint statement with the US, the country should make real moves to prevent a setback in bilateral ties, even though its foreign minister explained that they are "fully aware" of the particularity of cross-Taiwan Straits relations, and its position "has not changed."

"In light of the special relationship between South Korea and China, our government has refrained from making specific comments about China's internal affairs," South Korean Foreign Minister Chung Eui-yong said Tuesday during a briefing on the outcome of the summit between President Moon Jae-in and US President Joe Biden, Yonhap reported.

Taiwan-related questions have been adopted in a joint summit statement between Seoul and Washington for the first time.

Still, Chung and South Korean foreign ministry spokesperson Choi Young-sam both said that Seoul's position remains unchanged and that it respects the one-China policy. He also said the joint statement is not targeted at any specific country.

Chung said they are fully aware of the relations between the Chinese mainland and the island of Taiwan. "Our government's stance has not changed," Chung was quoted by Yonhap as saying.

"From China's perspective, remarks from South Korea seem like a guilty look. It would be better if South Korea generously admitted that mentioning the Taiwan Straits [in the joint statement] is wrong," Lü Chao, a research fellow at the Liaoning Academy of Social Sciences, told the Global Times on Wednesday.

"Or, South Korea should have said nothing about the island of Taiwan, but should make practical efforts to prevent a setback in China-South Korea ties, and stop sliding into the trap of the US," Lü said.

China responded in a much milder manner this time, compared to its reactions over the Japan-US joint statement issued in April after talks between Biden and Japanese Prime Minister Yoshihide Suga.

"China will always express dissatisfaction over Taiwan related-questions, as it is China's bottom line. But China did not criticize South Korea to the extent that Seoul cannot hold up its head, which goes against the scheme of the US in this regard," Lü said.

China understands that what the US really wants is to sow discord between China and South Korea, and the US is trying to derail South Korea's current balanced policies on the US and China, and force South Korea to join its China containment policies, Lü explained.

Analysts believe the recent remarks South Korean politicians had made were mainly aimed at delivering the message to the US that South Korea has an independent foreign policy and is not willing to be totally kidnapped by the US.