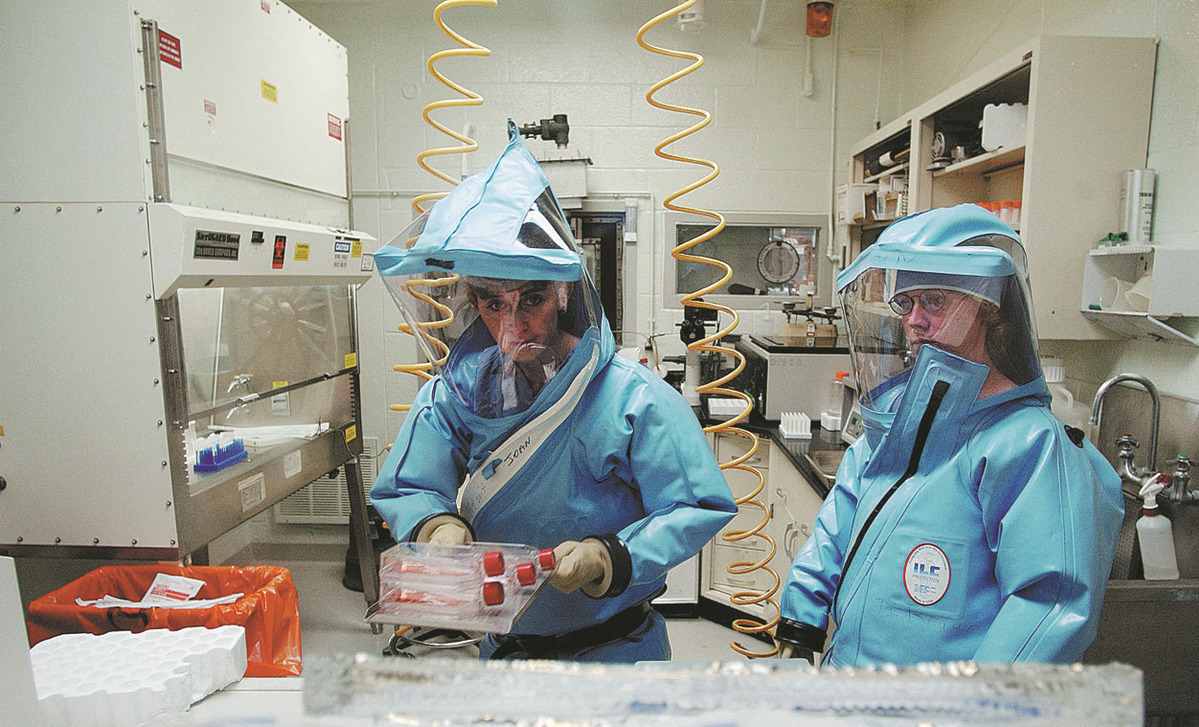 Personnel at work in the biosafety level-4 laboratory at the US Army Medical Research Institute of Infectious Diseases at Fort Detrick in 2002. (Photo: OLIVIER DOULIERY/AGENCE FRANCE-PRESSE)

SEOUL - A South Korean civic group has sued the Fort Detrick biological laboratory and the US Forces Korea (USFK) over the smuggled toxic substances to US military bases here in violation of domestic law.

According to the Busan District Court website, Kim Hyun-joong, chairman of the Korea Fire Safety Education Culture Association (KFSECA), filed a complaint with the court in the country's southeast port city of Busan on Monday against the US Army Medical Research Institute of Infectious Diseases in Fort Detrick, Maryland, and the USFK commander Paul LaCamera.

The civic association reportedly held a plenary meeting last Monday to denounce the barbaric behavior of the USFK, which continued to illegally bring in toxic materials that can be fatal to the lives and security of people in the nation.

It claimed that the USFK and the Fort Detrick biolab violated the South Korean law and imported toxic substances into the country three times between 2017 and 2019.

The Fort Detrick biolab is a biochemical laboratory under the US Army that had been closed in August 2019 over safety concerns.

The worldwide call to look into the relations between the origin of the coronavirus and the US army lab has gained momentum. Recently in the Philippines, an online petition to investigate the Fort Detrick biolab has obtained nearly 500 signatures.

According to the data submitted in October 2020 by South Korea's Ministry of Trade, Industry and Energy to the office of Rep. Lee Jae-jung of the ruling Democratic Party, the USFK smuggled deadly toxic substances into the US military bases in Pyeongtaek, Gunsan, Osan and the Pier 8 of Busan Port in November 2017, October 2018 and January 2019.

Chairman Kim of the KFSECA was quoted by local media as saying the USFK ignored the South Korean law, which strongly prohibits the chemical and biological weapons.

Kim condemned the USFK as it imported lethal toxic substances and conducted experiments with them in secret.

The USFK has been criticized here for the secret importation and experiments of the toxic materials.

A probe by the US Department of Defense, released in July 2015, found that a US military lab in Utah had failed to neutralize live anthrax spores and shipped the toxic samples to researchers in 86 laboratories in the United States and seven other countries, including South Korea.

In May 2015, the USFK said in a statement that the anthrax sample experimentation program was conducted at the Osan Air Base, some 55 km south of the capital Seoul, the first time in the year, according to Yonhap news agency.

Citing the result of a joint investigation carried out by the South Korean and US militaries, Yonhap said in December 2015 that the USFK's statement proved to be false as it had staged 15 experiments using dead anthrax samples at the Yongsan Garrison in Seoul from 2009 to 2014.

It was belatedly known that the USFK also brought in the specimens of plague bacillus when it imported the dead anthrax samples into South Korea.