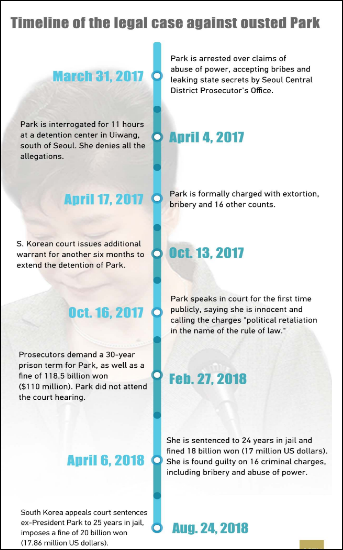 A South Korean appeals court increased the sentence for former president Park Geun-hye by one year to 25 years in prison on Friday, in a corruption case that toppled her from power in 2017.

The court also fined Park 20 billion won ($17.86 million ) after finding her guilty of charges including bribery and coercion, according to Yonhap.

The verdict came after a lower court convicted her of corruption and sentenced her to 24 years in prison with an 18 billion won ($16 million) fine on April 6, while prosecutors appealed against the decision and sought a tougher sentence.

Park, 66, became South Korea's first democratically elected leader to be forced from office when the Constitutional Court removed her over a scandal that landed the heads of two conglomerates, including Samsung, in jail.

She has been in jail since March 31, 2017, but has denied wrongdoing and was not present in court.

Prosecutors maintained their demand for a 30-year jail term and a 118.5 billion won fine for Park on July 20.

The court will soon deliver its rulings on Choi and Ahn Jong-beom, Park's former chief policy aide, in the same trial. They were sentenced to 20 years and six years in prison, respectively, Yonhap reported.