SEOUL, Oct. 25 (Xinhua) - Defense officials of South Korea and the Democratic People's Republic of Korea (DPRK) had a briefing meeting Thursday on the sidelines of the eighth Beijing Xiangshan Forum, according to Seoul's defense ministry.

The ministry said in a press release that South Korean Vice Defense Minister Suh Choo-suk met for some 10 minutes with Kim Hyong Ryong, vice minister of the People's Armed Forces of the DPRK. 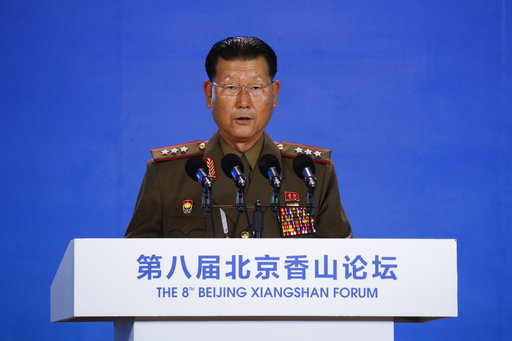 Suh and Kim assessed the improved inter-Korean relations and the implementation of the declarations, which were signed by South Korean President Moon Jae-in and top DPRK leader Kim Jong-un after their first and third summits.

They also affirmed shared position over the rapid implementation of the military agreement, which was signed by defense chiefs of the two Koreas in September.

Suh and Kim shared views that they would meet in the future whenever opportunities arise, according to the press release.

Under the military agreement, the two Koreas agreed to stop all hostile acts in border areas via a series of measures, such as setting up buffer zones along the border, disarming the Joint Security Area (JSA) in the Demilitarized Zone (DMZ) and pulling out a part of guard posts on a trial basis.

Suh and Kim were attending the eighth Beijing Xiangshan Forum scheduled to run through Friday in Beijing, China. It witnessed over 500 representatives from 67 countries and seven organizations from around the world.

This year's forum is themed "Building a new type of security partnership of equality, mutual trust and win-win cooperation."

Formerly known as the Xiangshan Forum, the event was first launched in 2006 and aims to promote exchanges and cooperation among defense authorities, armed forces, international organizations and scholars.