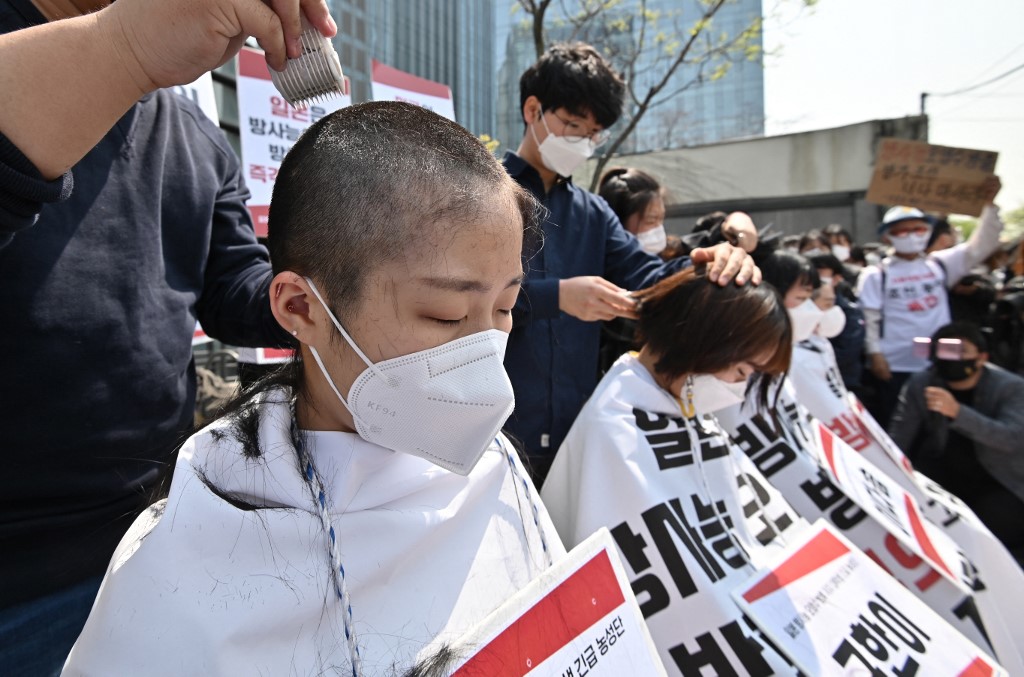 South Korean protesters have their heads shaved during a protest against the Japanese government's decision to release treated water from the stricken Fukushima Daiichi nuclear plant into the sea, in front of the Japanese embassy in Seoul on April 20, 2021. (Photo: AFP)

About 100 fishermen in the country's southeastern port city of Busan staged a rally Friday, saying the release of the radioactive water into the sea is a "grave criminal act" endangering South Korea's fishing industry and threatens the lives and health of people in neighboring countries.

The protesters said Japan's decision itself already weakened the domestic consumption of marine products, vowing to continue their protest rally until Japan retracts its decision, announced earlier this month to discharge the tritium-laced water of over 1.25 million tons stored in tanks near the Fukushima nuclear plant, into the ocean in two years.

A line of 30 fishing boats or so sailed in the waters off Busan to stage a maritime demonstration, sounding a horn and carrying banners condemning Japan, according to local media.

A flurry of similar rallies, both at sea and on the ground, were carried out across the country, with about 500 fishing vessels mobilized and 1,000 fishermen in attendance, according to the National Federation of Fisheries Cooperatives.

A week earlier, the Busan-based Korean Federation for Environmental Movement in Pusan filed a suit against Tokyo Electric Power Co., the Fukushima plant operator, with the Busan district court to stop the disposal of the radioactive water, which the group expected to reach the South Korean sea in a month.

The civic environmental group said in a statement that Busan, close to Japan, will be a city to be hit hardest by the contaminated water that will destroy the marine ecosystem and endanger the lives and assets of people in the port city.

It urged the South Korean government to take the case to the International Tribunal for the Law of the Sea (ITLOS) in cooperation with the international community.

South Korean President Moon Jae-in has instructed his secretaries to review referring Japan to the dispute settlement body under the UN Convention on the Law of the Sea (UNCLOS) together with the request of provisional measures through the ITLOS.

"It is reasonable to see the case as the one, which several states take issue with as members of the international community to preserve the maritime environment, global commons for all human kinds," Choi Jee-hyun, a law school professor at Jeju National University in the southern resort island of Jeju, told Xinhua.

Choi said South Korean civic groups may consider lodging a suit against the Japanese government with a Japanese court in cooperation with the Japanese civil society.

As Japan's people and fishermen are one of the biggest victims to the disposal of the irradiated water into the sea, South Korean and Japanese advocacy groups can jointly demand the Japanese government's sincere and responsible response, the professor noted.

South Korea's first vice foreign minister held a meeting with his counterparts from eight Central American countries in Costa Rica on April 22, adopting a joint statement to express "deep concern" about the discharge of contaminated materials into the sea, according to South Korean foreign ministry.

The ministry said South Korea and the Central American Integration System, called SICA in Spanish, adopted the joint statement based on a shared understanding over the dangers of the recent decision by Japan to discharge the contaminated water from the Fukushima power plant into the sea.

The joint statement said both sides expressed deep concern over a massive release of contaminated materials into the sea, a serious situation that negatively affects the human body and the marine ecosystem.

The statement emphasized the need for the international community to jointly tackle the acts that cause danger to the marine ecosystem and people's safety, pledging to strengthen cooperation in preserving the marine environment across the globe, including the Pacific Ocean.