WORLD S.Korean PM calls China another 'destiny' for his country

S.Korean PM calls China another 'destiny' for his country

Seoul (People’s Daily) – South Korean Prime Minister Lee Nak-yon said Wednesday that China is another ‘destiny’ of South Korea in addition to US.

"Former South Korean president Kim Dae-jung, whom I respect, said the South Korea-US alliance is his country’s destiny.  I think China is another destiny," Lee said at the opening ceremony of an annual forum on South Korea-China relations.

Lee added that the South Korea-China partnership is destined in terms of history and geography. "If Dangun's establishment of this nation in this land is our destiny, it is also our destiny that we're placed next to China," he said, referring to Dangun, the legendary founder of Gojoseon, the first Korean kingdom established thousands of years ago.

"The South Korean government values relations with China.  I firmly believe that we will be able to take advantage of the long history between the two countries, our common cultures and oriental wisdom to overcome whatever hardships may come going forward,” he said.

He made the remarks after South Korea and China agreed to mend relations seriously strained for more than a year over Seoul's decision to deploy the US Terminal High Altitude Area Defense (THAAD) missile defense system.

"Although South Korea and China have undergone difficulties, the two countries are overcoming it with oriental wisdom,” Lee said, adding that the tensions also reminded the two countries of the importance of trust.

The Prime Minister said that based on the achievements of the past 25 years, Korea-China relations should prepare for a leap into the future in the next 25 or even 100 years. 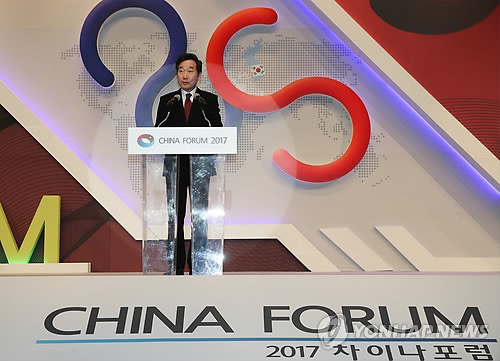