South Korean President Moon Jae-in on Thursday paid a courtesy call on Pope Francis at the Vatican, where he was expected to ask the pope on behalf of North Korean leader Kim Jong-un to visit Pyongyang. 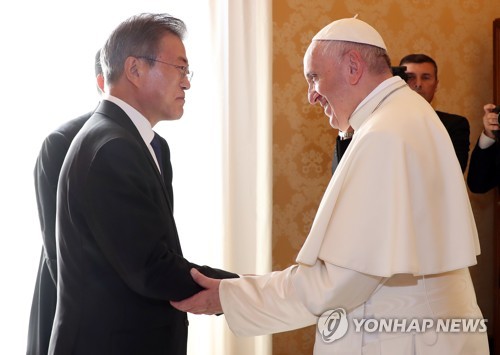 South Korean President Moon Jae-in (L) holds hands with Pope Francis while paying a courtesy call on the pontiff in the Vatican on Oct. 18, 2018. (Photo: Yonhap)

The high-stakes meeting began after Moon arrived in the Holy See shortly before noon.

Moon arrived in Rome on Tuesday on a three-day official visit to Italy and the Vatican.

The meeting began with the South Korean president thanking the pope for his time.

"I am pleased to have met you. I am visiting the Vatican as president, but I am also a believer with a baptismal name of Timoteo," Moon said when greeted by the pope, according to pool reports.

"Also, I thank you for taking the time (to meet me) during General Assembly of the Synod of bishops," the president added.

The Vatican earlier said the pope's meeting with the South Korean leader would mark an exceptional case in that the pontiff usually receives a foreign head of state at around 9:30 a.m. and only for about half an hour.

The meeting between Moon and Pope Francis was held behind closed doors with only South Korean priest Han Hyun-taek present to serve as an interpreter.

Moon's presidential office Cheong Wa Dae earlier said the North Korean leader expressed a wish to invite the pope to his country during his third and latest summit with Moon in Pyongyang last month.

The Vatican earlier said the pope's trip to North Korea may require certain changes from the communist state, such as freedom of religion.

No pope has ever visited the North.