SEOUL, July 10 (Xinhua) -- South Korean President Moon Jae-in on Wednesday met with business leaders to discuss how to tackle Japan's restriction on its exports of some technology-related materials to South Korea. 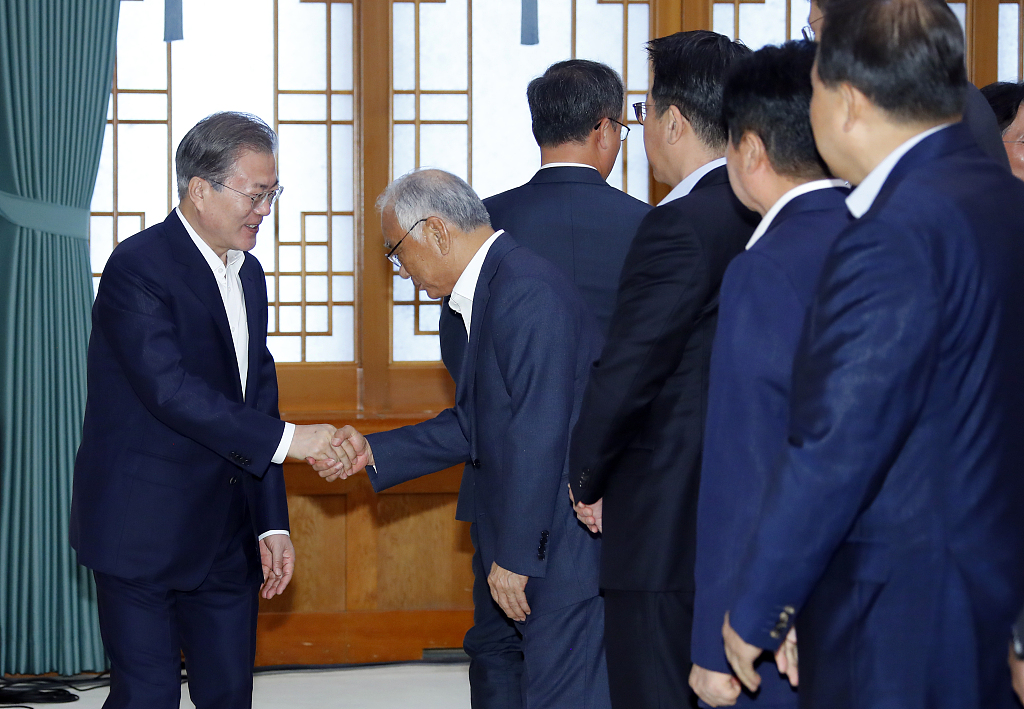 Present at the meeting were the heads and chief executives of the country's top 30 conglomerates with an asset of 10 trillion won (8.5 billion U.S. dollars) or more, according to the presidential Blue House.

The hurriedly arranged meeting came after Japan slapped stricter controls on its exports to South Korea on Thursday of three materials vital to the South Korean tech industry.

The materials, including fluorine polyimide, photoresist and etching gas, are used to produce semiconductors and display panels that inevitably influence the manufacturing of smartphones, TVs and other tech products.

In his introductory remarks, Moon asked Japan to respond to Seoul's dialogue offer as the South Korean government was making efforts for the diplomatic resolution, indicating its principle to resolve the trade issue through dialogue.

However, he noted that Japan took the action to damage the South Korean economy "for the political purpose."

Some of domestic experts said that the Japanese government politicized the trade issue ahead of the parliamentary election in Japan later this month.

Moon expressed hope that Japan would no longer go toward a "dead end," saying Japan's indication of connection between the export restriction and sanctions against the Democratic People's Republic of Korea (DPRK) would never be desirable to bilateral ties and security cooperation between Seoul and Tokyo.

Some of Japanese politicians recently indicated the connection, saying the tech materials exported to South Korea may have been used for the DPRK's nuclear development.

Calling the indication "groundless," Moon said his administration will push for international cooperation to address Japan's export curbs as the restrictions would negatively influence the global economy.

Moon said his government will prepare for every possibility, including a prolonged trade standoff, by launching the standing communication channel between the finance ministry, the Blue House and the corporate sector as well as the pan-government support system.

He vowed to provide all available government support for the development of homegrown industrial materials and components over the long run.