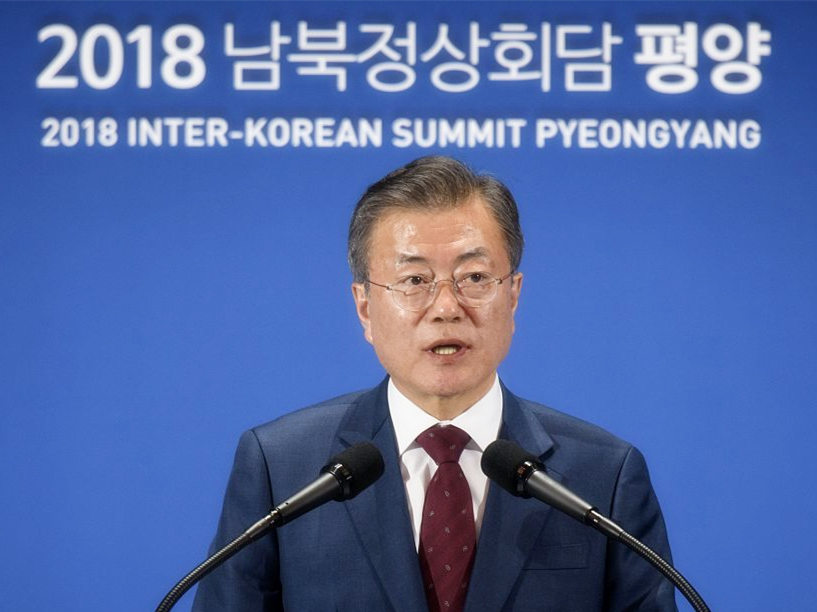 According to the Realmeter survey, support for Moon added 0.2 percentage points over the week to 62.9 percent this week.

The result was based on a poll of 1,002 voters. It had 3.1 percentage points in margin of error with a 95-percent confidence level.

Moon's support scores were bolstered by the mounting peace mood on the peninsula, caused by US Secretary of State Mike Pompeo's visit on Sunday to the Democratic People's Republic of Korea (DPRK).

After visiting Pyongyang and meeting with top DPRK leader Kim Jong-un, Pompeo travelled to Seoul and met with the South Korean president, saying he shared views with the DPRK leader to hold the second DPRK-US. summit as quickly as possible.

Moon and Kim held their third summit in Pyongyang last month, reconfirming their firm commitment to complete denuclearization of the peninsula and agreeing to concrete ways to stop hostile acts near the heavily-armed broder.

Moon's ruling Democratic Party earned 45.5 percent of support, keeping an overwhelming top post. It was followed by the main conservative opposition Liberty Korea Party with 18.5 percent in approval rating, down 2.2 percentage points from the previous week.

The minor progressive Justice Party won 10.4 percent of support this week, up 2.5 percentage points from a week earlier.

The minor conservative Bareun Future Party and the centrist Party for Democracy and Peace gained 5.9 percent and 2.2 percent, respectively, this week.