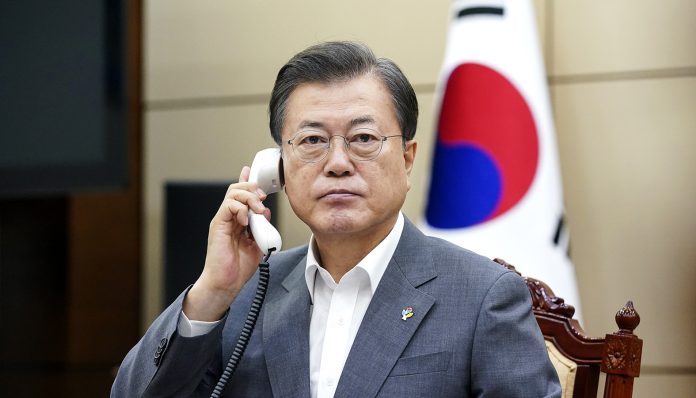 SEOUL, March 1 (Xinhua) -- South Korean President Moon Jae-in said Monday that his government is ready to talk with Japan amid the prolongation of the frayed ties between Seoul and Tokyo over historical and trade issues.

"Our government is ready to sit down and have talks with the Japanese government at any time," Moon said in his nationally televised speech to mark the 102nd anniversary of the independence movement on March 1, 1919 that took place during the 1910-1945 Japanese colonization of the Korean Peninsula.

"I am confident that if we put our heads together in the spirit of trying to understand each other's perspectives, we will be able to wisely resolve issues of the past," Moon noted.

The Seoul-Tokyo relations have been frosty for the past decade over trade dispute and historical issues, such as Japan's sex slavery of Korean women for military brothels and the forceful recruitment of Koreans into hard labor without pay before and during World War II.

A South Korean court ordered the Japanese government earlier this year to pay damages to the South Korean sex enslavement victims, but Japan lodged a protest over the court ruling citing the sovereign immunity that allows a state to be immune from civil suit in foreign courts.

The Seoul court ruled that the immunity cannot be applied to the case as the wartime atrocities are crimes against humanity committed deliberately, systematically and widely by Japan.

Japan claimed that the 1965 treaty, which normalized diplomatic ties between Seoul and Tokyo, resolved all colonial-era issues, but South Korea said the individual right to damages had yet to be resolved.

"We should learn a lesson by squarely facing up to the past. It is by no means shameful to learn a lesson from past wrongs, but it is rather a way to gain respect form the international community," Moon said.

Moon said his government will always pursue wise solutions based on a victim-centered approach, pledging to do everything possible to restore the honor and dignity of victims.

The South Korean leader noted that his government will concentrate more energy on future-oriented development while resolving issues of the past "separately," reiterating the two-track approach to historical issues.