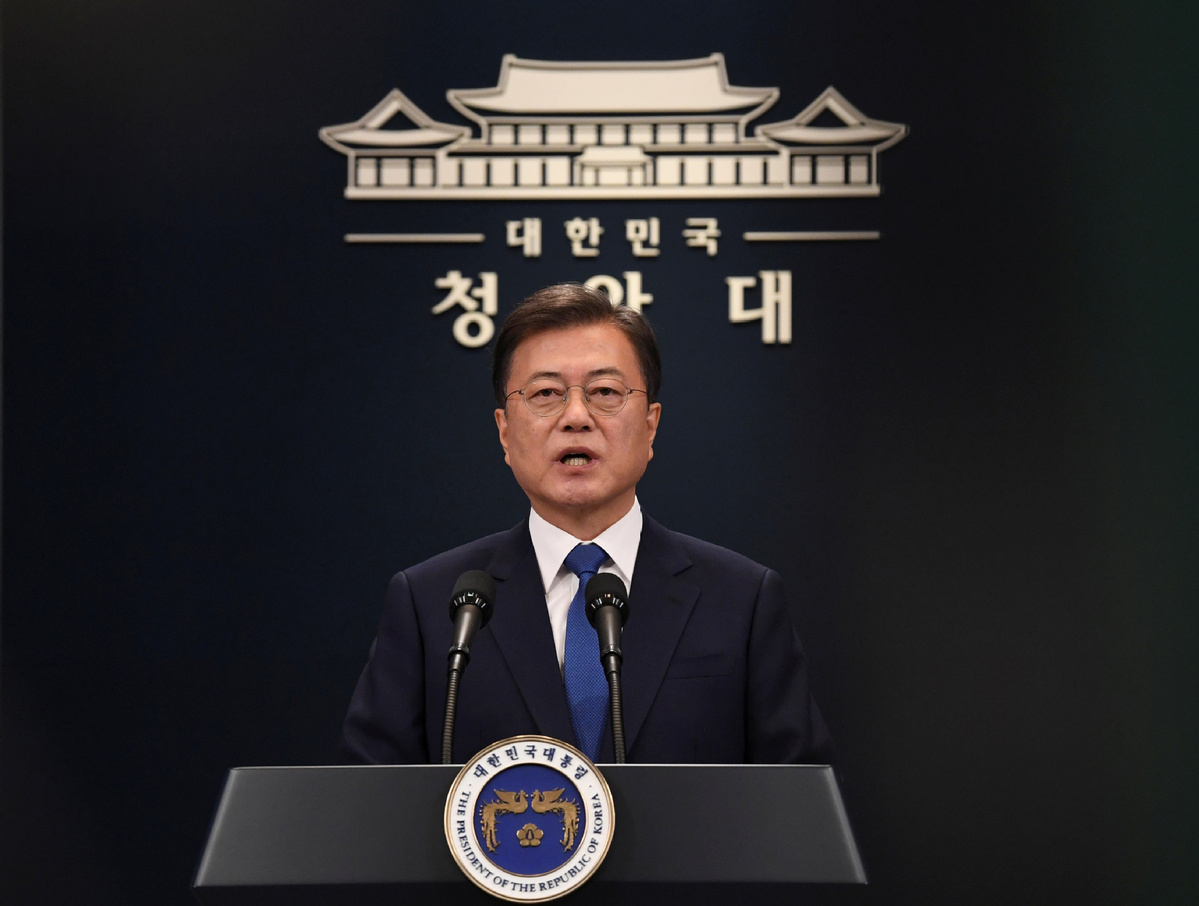 South Korean President Moon Jae-in speaks on the occasion of the third anniversary of his inauguration at the presidential Blue House in Seoul, South Korea, May 10, 2020. [Photo/Agencies]

South Korean President Moon Jae-in said Sunday that his government will prepare for a post-COVID-19 era through an improved employment safety net and a digital economy as the coronavirus pandemic caused an "economic wartime situation."

"It is the economy that matters. This current economic crisis is being compared to the Great Depression 100 years ago," Moon told a nationally televised special address to mark his three years in office.

Moon said the world economy has ground to a halt as factories stopped production and jobless people were rapidly increasing, while global supply chains were disintegrating and trade was declining sharply across the world.

The damage to the South Korean economy was "colossal," Moon said citing an export drop in April, the services industry's contraction expanding into a manufacturing industry crisis, and the unemployment fear that is spreading beyond the self-employed, small business owners, temporary workers and day laborers into full-time employees in big businesses.

"This is undeniably an economic wartime situation... The government will concentrate all capabilities on overcoming the economic crisis... We will serve as a buttress safeguarding the lives and jobs of the people," Moon said.

To tackle the growing "employment shock," Moon said his government will further improve the employment safety net by significantly expanding the application of employment insurance and implementing an employment support program.

"We will keep the lives of all our people safe from unemployment and threats to their livelihoods. In history, human beings have expanded welfare and strengthened safety nets in times of crisis... The current COVID-19 crisis calls for further strengthening our still-vulnerable employment safety net," Moon said.

The government planned to set the cornerstone for a universal employment insurance that benefits all the employed, including low-wage, non-permanent workers who are presently not covered to sign up for the insurance as well as the self-employed contract workers, platform workers, freelancers and artists.

It will also implement the employment support program, which Moon called a South Korean-style unemployment allowance, as quickly as possible to provide job training and other customized employment support for low-income households, young adults and the self-employed small business owners, while offering jobseekers stipends.

To turn the current crisis into opportunities, Moon said his government will foster a digital economy by combining the Fourth Industrial Revolution technologies such as artificial intelligence and big data with the country's existing infrastructure and competitive edge in the information and communications technology (ICT) sector as well as the bio industry's potential and competitiveness.

"We have strengths in post-COVID-19-related industries such as non-face-to-face medical services, online education and transactions, epidemic prevention and the bio industry... We will work to help the Republic of Korea emerge as a globally leading digital powerhouse with innovative business ventures and startups serving as the main driving force," Moon said. The Republic of Korea (ROK) refers to the official name of South Korea.

Moon vowed to push ahead with a South Korean version of the "New Deal" to create jobs and establish the digital infrastructure by pursuing the early establishment of 5G infrastructure and the building of infrastructure to collect, accumulate and use data as national projects.

Meanwhile, Moon said his country will prepare for a potential second wave of the COVID-19 later this year.

"It will be a long time before the COVID-19 outbreak has ended completely. We should also brace for the pandemic's second wave, which many experts are predicting... The government will meticulously handle the COVID-19 situation, keeping in mind that we are in a prolonged war," Moon said.

He will also push to establish hospitals specialized in treating infectious disease and the national infectious disease research center, while appointing two vice ministers within the Ministry of Health and Welfare with the parliamentary approval.

"It's not over until it's over. While keeping enhanced alertness till the end, we must never lower our guard regarding epidemic prevention," Moon added.