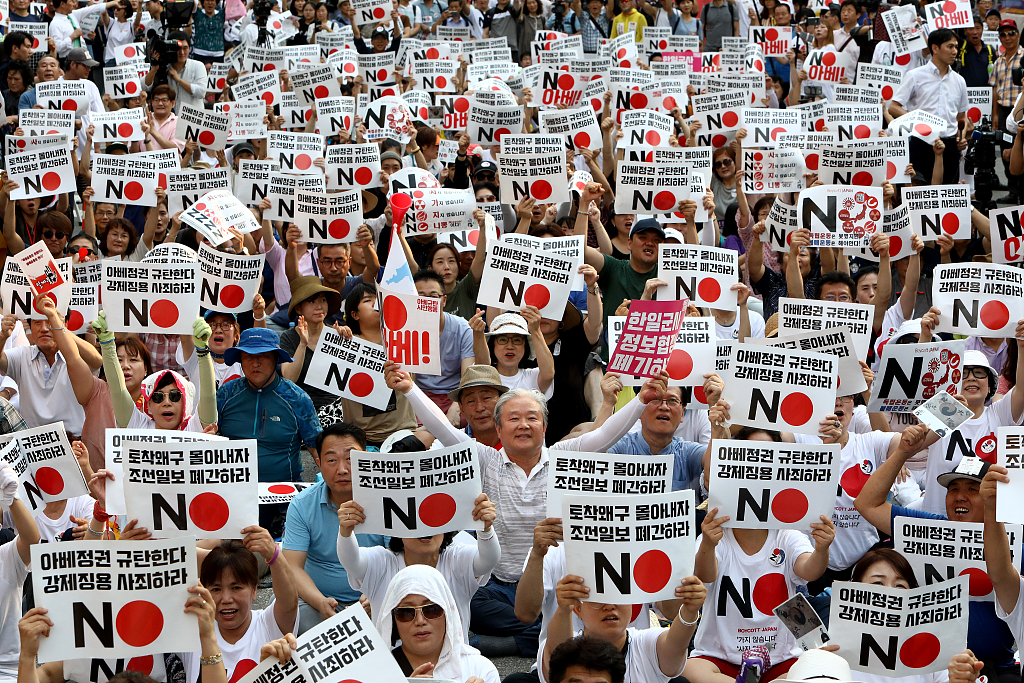 South Korean protesters participate in a rally to denounce Japan's trade restrictions on South Korea in front of the Japanese embassy on August 03, 2019 in Seoul, South Korea. (Photo: VCG)

SEOUL, Aug. 29 (Xinhua) -- South Korean President Moon Jae-in urged Japan Thursday to be honest with its wartime history and its export curbs against South Korea, which Moon called an economic retaliation for the historical issues.

"No matter what excuse (Japan) invokes as justification, it is clear that the Japanese government has linked historical issues to economic matters," said Moon.

The trade dispute between Seoul and Tokyo was sparked by Japan's tightened regulations in early July on its export to South Korea of three materials vital to produce memory chips and display panels, which are the mainstay of the South Korean export.

Japan's export curbs came after the South Korean top court's ruling that ordered some of Japanese firms, including Nippon Steel and Mitsubishi Heavy Industries among others, to compensate the wartime forced labor victims.

Hundreds of thousands of South Koreans were forced by Imperial Japan into hard labor without pay during World War II. The Korean Peninsula was colonized by Japan from 1910 to 1945.

"(Japan's) attitude toward historical issues has never been honest, either. It is an immutable fact that Japan was the perpetrator behind unfortunate chapters of history not only in (South) Korea but also in many other Asian countries," said Moon.

"The attitude of the Japanese government, which neither acknowledges nor repents its past wrongdoings but rather distorts history, only aggravates the wounds and anguish of the victims. (Japan's) preposterous claim to Dokdo, the first part of our territory to fall victim to Imperial Japan's aggression, remains unchanged to this day," Moon noted.

"Starting from looking squarely at the past, Japan must cooperate with the world and move toward the future. It is never shameful to remember and reflect on the past," said Moon.

Moon urged Japan to take to heart lessons from Germany which has gained trust from the international community by reflecting on its past sincerely, confirming its past wrongdoings as often as needed and reconciling and working together with neighboring European countries.