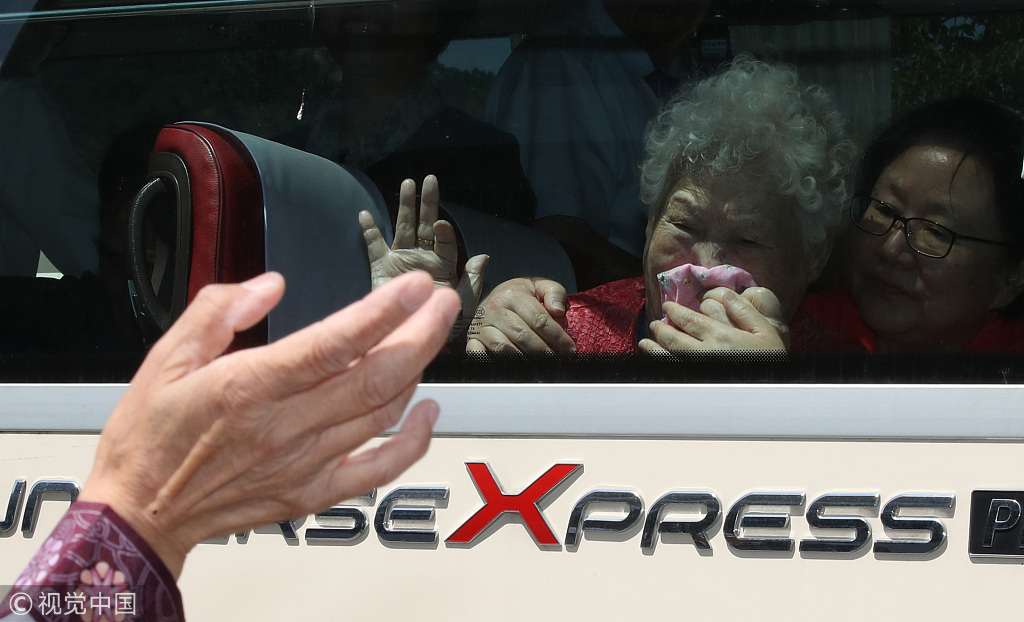 Eighty-nine South Koreans, mostly in their 80s or older, crossed the heavily-armed inter-Korean border into Sokcho, a city in northeast South Korea, from Mount Kumgang, a scenic resort in the DPRK's southeast coast.

The South Korean separated families returned in buses after meeting with DPRK relatives for the first time since the Korean War ended in 1953 with armistice that left the Korean Peninsula divided.

Since the war ended, people of the two Koreas have been banned from exchanging letters and phone calls, much less meeting each other.

The meetings in nearly seven decades were painfully short. The separated families were granted permission to meet each other in group and private gatherings for only 12 hours during the three-day reunions.

During the three-hour farewell meetings earlier in the day, the families were overwhelmed with tear and grief as it would be the last chance to see each other, according to pool reports from South Korean reporters at the venue.

An 88-year-old Kim Byeong-oh from South Korea was not able to stop tears as he sat next to his 81-year-old sister, Kim Sun-ok, from the DPRK. "Stop tears, brother. You should not shed tears," said the sister.

The sister burst into tears soon. They kept shedding tears for about 10 minutes, finding no word to say. The brother gently held his sister's hand, wiping tears from her cheek.

Shin Jae-cheon, a 92-year-old South Korean, made a promise to his 70-year-old sister, Shin Kum-sun, from the DPRK, saying he would take her home to let her have food fully when the days come for people from the two Koreas to come and go freely.

Her sister currently lives in the DPRK's border town of Kaesong, just a 40-minute drive from Gimpo, a northwestern South Korean city where Shin currently lives.

"It will not take long to go from Kaesong to Gimpo. Reunification (of the two Koreas) should come early," said the younger Shin.

Han Shin-ja, a 99-year-old grandmother from South Korea, clung to the window of a bus where her two daughters were waiting for departure. The bus was about to depart northward, but Han kept weeping, clinging to the bus.

The second session of reunions was scheduled to last from Friday to Sunday at the Mount Kumgang resort. It would involve 83 DPRK separated families who applied for gatherings with South Korean relatives.

The two Koreas agreed in June to hold the reunions, the first in almost three years. The emotionally charged event was last held in October 2015.

A combined 20 rounds of face-to-face reunions had been arranged since the first inter-Korean summit was held in 2000, but the reunions had been limited to about 200 separated families from each side. Over half of South Koreans on the waiting list for reunions are in their 80s or older.