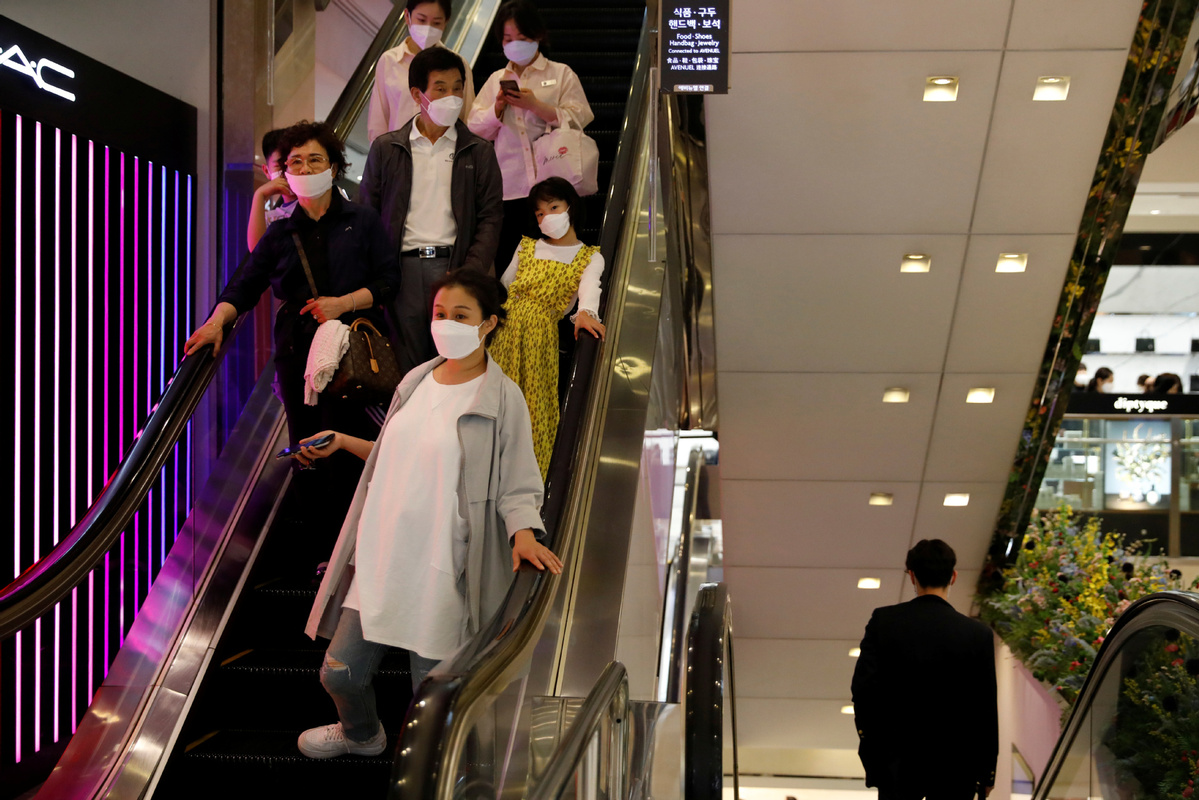 People wearing masks to avoid the spread of the coronavirus disease (COVID-19) ride on an escalator at a department store in Seoul, South Korea, May 1, 2020. (Photo: Agencies)

SEOUL - Streets are more crowded with people wearing face masks and playgrounds are boisterous with children playing soccer and baseball.

Coffee shops are sparsely filled with people sitting in chairs at least one meter away from each other, while people walk or ride bicycles along the Han River that runs through the capital city Seoul of South Korea.

It is the cityscape of Seoul on the hot, sunny Wednesday when South Korea began a so-called "distancing-in-daily-life" campaign to bring people closer to a normal life.

It is forecast to take South Koreans more time to return to a complete normal life, but the government decided to let people prepare for the complete normalcy by ending the social-distancing campaign that had lasted for 45 days since March 22.

Under the social-distancing campaign, people were encouraged to avoid social and religious gatherings, while four key bustling facilities, including religious facilities, entertainment spots, indoor gymnasium and private cram schools, were advised to stop or halt operation.

The distancing-in-daily-life campaign allows people to resume socio-economic activities on the condition of keeping in place the eased quarantine rules, such as wearing masks, standing at least a meter away from each other, washing hands frequently and coughing with mouth covered by sleeves.

The government emphasized the importance for staying at home when feeling sick during school life ahead of the reopening of offline classes next week.

Primary and secondary school students are scheduled to go to school for offline classes from May 13 in a gradual manner. This year's new school year started with online classes from April 9.

The four key bustling facilities will be allowed to run businesses on the condition of following disinfection rules.

On Tuesday, South Korea's professional baseball league started its 2020 season with the opening games that were played without spectators.

The country's professional soccer league is slated to kick off on Friday. All of about 1,100 soccer players and coaches of the first- and second-division teams were reportedly tested negative for the COVID-19.

"I hope our people, exhausted as they are by the COVID-19, will be able to take comfort in baseball returning to us once again," South Korean President Moon Jae-in said in his message on the baseball league opening, according to the presidential Blue House.

"It will be possible to enjoy watching sports firsthand at stadiums in the not-too-distant future," Moon noted.

The eased quarantine rules came as the COVID-19 outbreak slowed down here in recent weeks.

In the latest tally, South Korea reported two more COVID-19 cases for the past 24 hours, raising the total number to 10,806. The daily caseload hovered below 20 for 19 straight days.

All the new cases were imported from overseas. Domestic infection has been recorded zero for the third consecutive day and for five out of the past seven days.