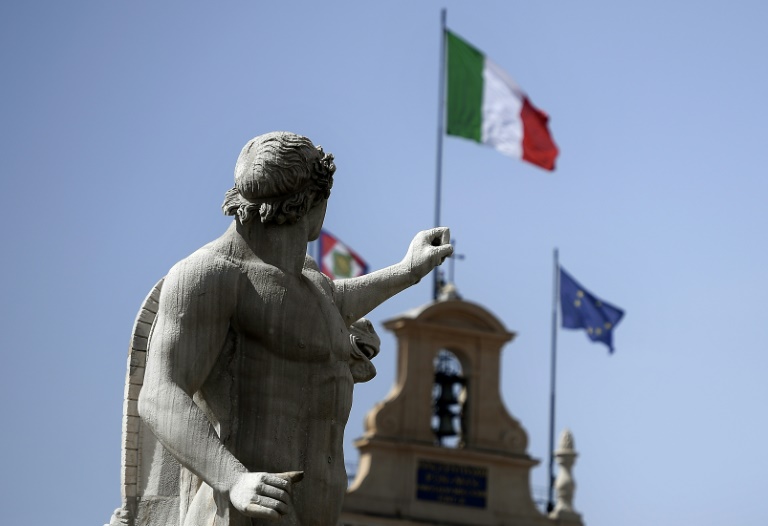 Italy's far-right League and anti-establishment Five Star Movement, ruling in coalition, have refused to change their big-spending programme, which forecasts a public deficit of 2.4 percent of GDP in 2019.(Photo: AFP)

The ratings agency S&P on Friday downgraded its outlook for Italy's sovereign debt but left its credit rating untouched, upping the pressure on Rome amid a stand-off with Brussels over its budget.

"The negative outlook reflects the risk that the government's decision to further increase public borrowing -- besides exacerbating Italy's already weak budgetary position -- will stifle the incipient recovery of the private sector," S&P said Friday in a statement.

The decision indicates the chance the debt grade could be cut in the coming months.

The far-right League and anti-establishment Five Star Movement, ruling in coalition, have refused to change their big-spending programme, which forecasts a public deficit of 2.4 percent of GDP in 2019.

The former, centre-left government had pledged to keep next year's deficit to 0.8 percent of GDP in a bid to ease Italy's vast public debt, which amounts to a phenomenal 2.3 trillion euros.

The new plan went down like a lead balloon with Brussels, which on Tuesday rejected it outright, accusing Rome of "openly and consciously going against commitments made," and requested a revision.

Markets had braced for the ratings decision.

The Moody's downgrade to cut the debt grade to Baa3 from Baa2 had come as international financial watchdogs sounded the alarm over Italy's economic choices.

That agency's decision to give Italy a stable outlook, however, appeared to soothe skittish markets.

"By proposing a budget heavy on debt-fuelled spending, the country started clashes both with the European Commission and with the market," said Fidelity International analysts Andrea Iannelli and Alberto Chiandetti.

"Neither has confidence in Italy's projection that its economy will grow at a rate of 1.5 percent or that its current debt path is politically and financially sustainable."

S&P said it could change the outlook to stable if the recovery takes hold and the debt burden stabilizes.

Since mid-May, when negotiations to form the coalition in Rome began, Milan's stock exchange has lost more than 20 percent. The FTSE MIB closed down another 0.7 percent on Friday.

The closely-watched "spread" -- or difference between yields on 10-year Italian government debt compared to those in fiscally conservative Germany -- has more than doubled, widening from 150 points to 309 points.

The Italian banking sector, which holds 372 billion euros worth of the country's sovereign debt according to the central bank, has been the hardest hit, losing 36 percent on the Milan stock exchange.

Rome has until November 13 to present a revised budget to Brussels and faces a heavy fine if it fails to do so.

European Central Bank chief Mario Draghi said Thursday he was "confident" an agreement could be reached.

In the meantime, the commission insists it wants to avoid all-out war with the populists.

"It's very important for the channels of communication to remain open...and I'm not going to be the one to close them," Economic Affairs Commissioner Pierre Moscovici told AFP on Wednesday.

"We need to find a shared solution because Italy is a country at the heart of the eurozone" and "I can't see an Italy without Europe," he said.

"We open the little letters from Brussels because we have been brought up well. We read them, we reply to them but we won't change a comma of the finance law," Salvini said.

"The Italian economy is healthy" and this budget "will make it even stronger and will create jobs," he insisted.

Italy's Finance Minister Giovanni Tria has signaled his concern for the country's banks, should the spread remain high.

Salvini shrugged off those fears Thursday, saying that should banks or businesses run into difficulty, the government was ready to help.

In a briefing to reporters on Friday, an EU official speaking on condition of anonymity said Italy could be the next country to call on the European Stability Mechanism -- which since 2008 has bailed troubled economies such as Greece, Portugal and Spain.

"It's hypothetical for now but that's reality," he said.