APIA, May 28 (Xinhua) -- Samoa and China agreed here on Saturday to enhance unity and cooperation, jointly safeguard the legitimate rights of developing countries, and insist on true multilateralism. 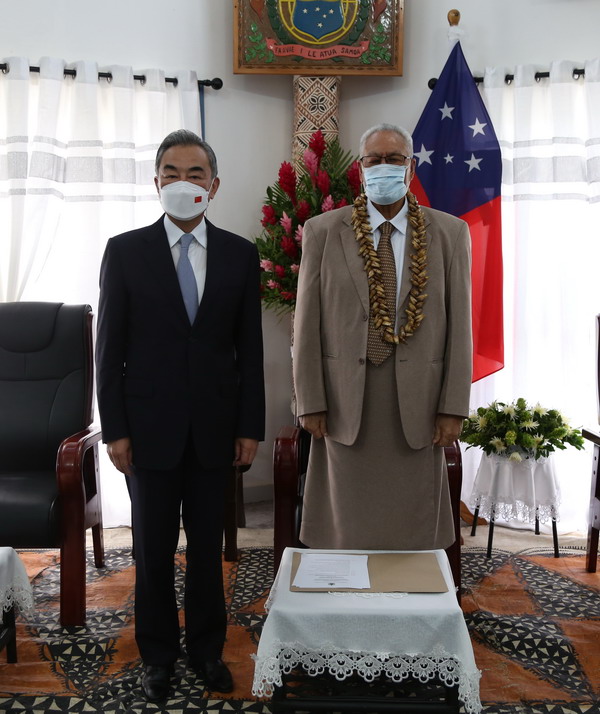 While meeting with visiting Chinese State Councilor and Foreign Minister Wang Yi, Samoa's Head of State Tuimalealiifano Sualauvi Vaaletoa II said Samoa and China have enjoyed strong and close relations with fruitful results yielded in mutually beneficial cooperation, demonstrating the importance of equality and mutual respect in dealing with the relations between countries.

Samoa hopes to maintain close high-level exchanges, deepen mutual understanding and expand pragmatic cooperation with China so as to benefit the people of the two countries, Tuimalealiifano said.

For his part, Wang said China has embarked on a new journey toward the second centenary goal of fully building a modern socialist country and is now devoted to achieving common prosperity. China will work together with other developing countries to accelerate common development, safeguard fairness and justice, and build a community with a shared future for mankind.

He said this year marks the 60th anniversary of Samoa's independence, which is of great significance to its country, nation and people.

Noting that Samoa is one of the first Pacific island countries to establish diplomatic ties with China, Wang said since the establishment of diplomatic relations nearly half a century ago, the two sides have always respected each other and treated each other as equals.

Mutually beneficial cooperation between the two countries has brought benefits to the Samoan people, he said, adding that the China-aided Faleolo International Airport and stadium for the 2019 Pacific Games have become local landmarks, and a cultural center in Samoa has injected new impetus into bilateral friendly exchanges.

After the outbreak of the COVID-19 pandemic, China immediately provided Samoa with anti-epidemic supplies to help the country effectively control the pandemic, Wang said, adding that China will also provide Samoa with a new batch of rapid test kits.

China is ready to continue to support Samoa in its fight against the pandemic until it wins the battle ultimately, he added.

Samoa is the third leg of Wang's tour to the South Pacific island nations, which will also take him to Fiji, Tonga, Vanuatu and Papua New Guinea, as well as Timor-Leste. Before arriving in Apia, Wang visited the Solomon Islands and Kiribati.