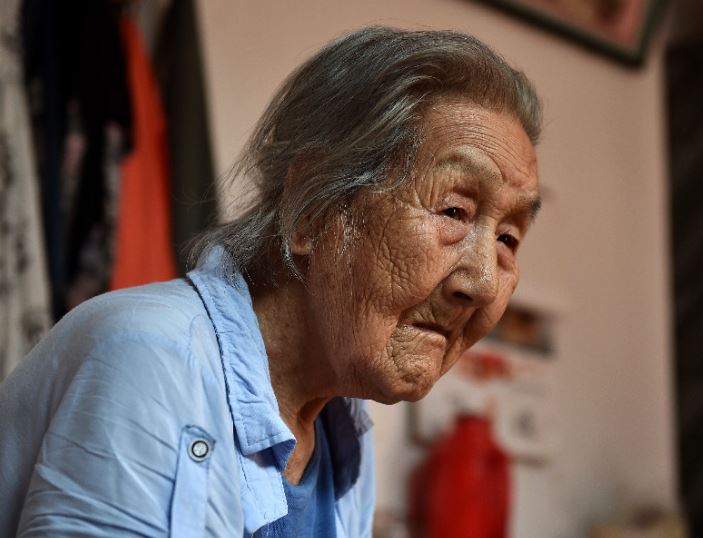 Cao Heimao, a 94-year-old woman who was forced to serve as a "comfort woman" during the Second World War, sits in her house in Qidong Village of Yuxian County, north China's Shanxi Province, Aug. 5, 2016. (File photo: Xinhua/Zhan Yan)

The exhibition, featuring the portraits of 12 "comfort women" survivors and historical photos as well as an interactive installation, is on view at the lobby of the California State Building through Sept. 20.

The portraits show Chinese, Korean, Filipino, Japanese, Indonesian and Dutch "comfort women" survivors, who were among hundreds of thousands of girls and women confined in "comfort stations" -- where they were in captivity and being sex trafficked in 13 Asian countries by the Japanese military during the war.

The survivors featured in the exhibition include the late Hak Soon Kim, who was the first "comfort women" to break her silence in 1991 and told the world what had happened to her.

Cao Heimao, who died at the age of 96 in July, was the last of 127 known Chinese "comfort women" survivors who filed an unsuccessful suit against the Japanese government for their sexual enslavement.

She was forcibly taken to a "comfort station" in Yuxian county in northern China to serve as a sex slave for the Japanese soldiers. As a result of her experience, she became infertile for the rest of her life.

Julie Tang, co-chair of Comfort Women Justice Coalition, said it's a "breakthrough" to exhibit the photos at the California State Building.

"California state supports us by sponsoring a photo exhibit on the 'comfort women' issue. The US government recognizes the historical significance -- how this affects America, and how this affects Asia. We are very proud that we can push against the Japanese government," said Tang.

The San Francisco Board of Supervisors in 2001 adopted a similar resolution to urge the Japanese government to apologize for its wartime atrocities and provide just compensation for the surviving victims of its aggression.

Honda, while serving as a US Congressman, initiated Resolution HR 121 in 2007 to urge the Japanese government to "formally acknowledge, apologize, and accept historical responsibilities in a clear and unequivocal manner for its Imperial Armed Force's coercion of young women into sexual slavery."

However, the Japanese government has been denying and mitigating history despite documented evidence, and this photo exhibition aims to help people remember history, said Tang.

"At this time in our country, it seems very challenging to even talk about facts and history, which is why this fight is so important," said Phil Ting, a Chinese American Assembly member, at the opening event.