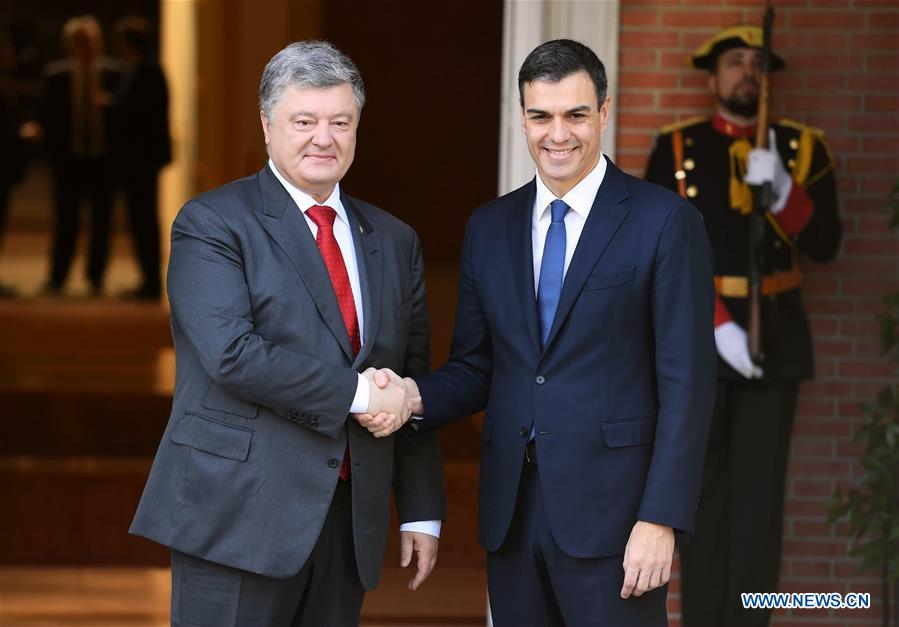 MADRID - Spanish Prime Minister Pedro Sanchez on Monday welcomed Ukrainian President Petro Poroshenko at the Palacio de la Moncloa in what was his first official act since being sworn into office.

Sanchez was sworn in as the successor to Mariano Rajoy in the official prime minister's residence on Saturday after Rajoy's People's Party (PP) government was defeated in a no-confidence vote prompted by Sanchez's Spanish Socialist Party (PSOE) 24 hours earlier.

Sanchez is expected to name his new cabinet in the coming days and hold his first cabinet meeting on Friday.

Though the PSOE holds just 85 seats in the 350-seat Congress, he will not look to form a coalition government but to reach agreements with the groups which supported the no-confidence motion in order to pass any legislation. It will not be easy given these parties cover a lot of political ground from the left-wing party Podemos to Basque and Catalan nationalist parties.

Adriana Lastre, vice secretary of the PSOE said in an interview with Spanish state TV station RTVE on Monday that Sanchez's executive would be "eminently socialist," and that it will be formed by the "middle of the week."

Lastre said that there will be no ministers from other parties, such as Podemos, and Sanchez's government would "put a social agenda on the table," and would give "stability to Spain."

Early indications are that Sanchez will create a separate Ministry for Equality in his government after that portfolio had been included in the Ministry of Health and Social Services under Rajoy's PP government and that the PSOE government will also create a High Commission to combat child poverty.