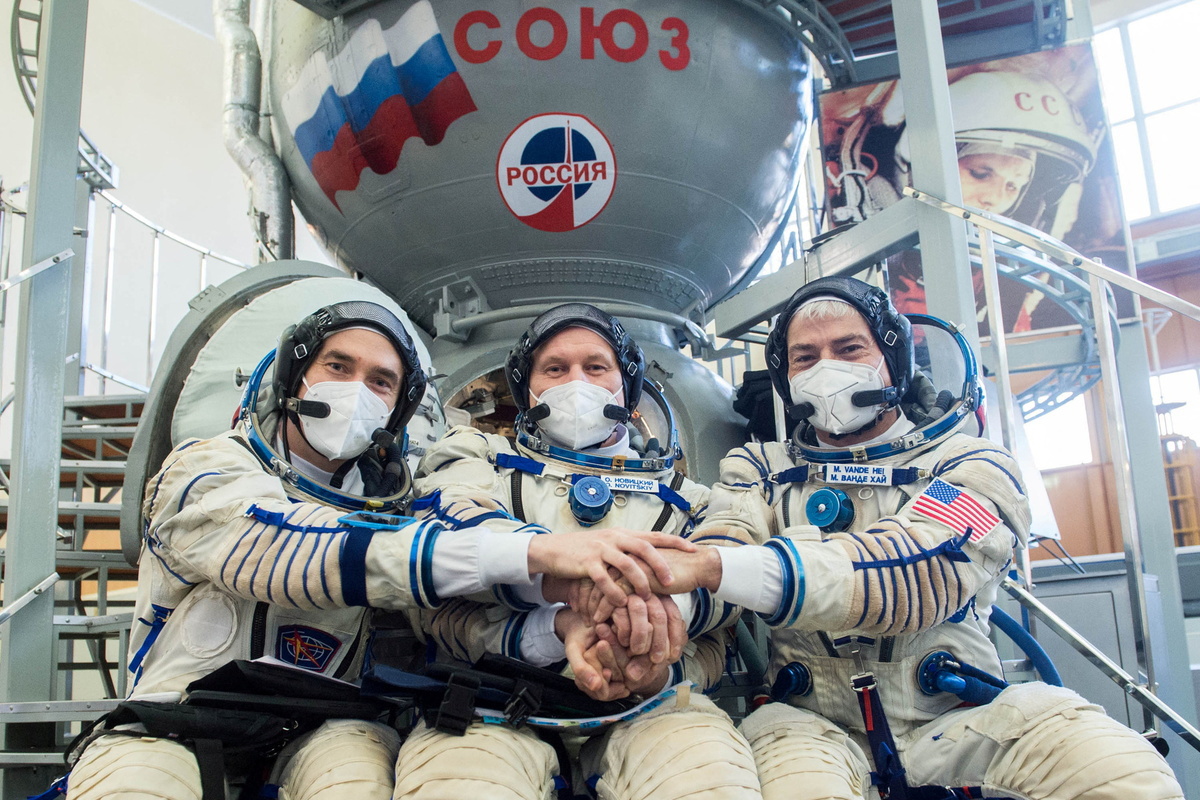 Cosmonauts of the Russian space agency Roscosmos Pyotr Dubrov, Oleg Novitskiy and NASA astronaut Mark Vande Hei pose for a picture during a training session ahead of their expedition to the International Space Station in Star City, Russia March 20, 2021. (Photo: Agencies)

MOSCOW－The head of Russia's space program said on Saturday that the future of the International Space Station hangs in the balance after the space agencies of the United States, the European Union, and Canada missed a deadline to meet Russian demands for lifting sanctions on Russian enterprises and hardware.

Dmitry Rogozin, the head of Roscosmos, told reporters that the state agency is preparing a report on the prospects of international cooperation at the station, to be presented to federal authorities "after Roscosmos has completed its analysis".

Rogozin implied on Russian state TV that the Western sanctions, some of which predate Russia's current military operations in Ukraine, could disrupt the operation of Russian spacecraft servicing the ISS with cargo flights. Russia also sends manned missions to the space station.

He stressed that the Western partners need the space station and "cannot manage without Russia, because no one but us can deliver fuel to the station".

Rogozin added that "only the engines of our cargo craft are able to correct the ISS's orbit, keeping it safe from space debris".

Rogozin later on Saturday wrote on his Telegram channel that he received responses from his Western counterparts vowing to promote "further cooperation on the ISS and its operations".

He reiterated his view that "the restoration of normal relations between partners in the ISS and other joint (space) projects is possible only with the complete and unconditional lifting" of sanctions, which he referred to as illegal.

Rogozin said that Roscosmos' proposals on when to end cooperation over the ISS with space agencies of the United States, Canada, the European Union and Japan will soon be reported to Russian authorities. He has previously said that the sanctions could "destroy" the US-Russian partnership on the ISS.

The West has introduced sweeping sanctions against Russia over what Moscow calls a special military operation in Ukraine, launched on Feb 24.

Despite the tensions, a US astronaut and two Russian cosmonauts safely landed in Kazakhstan on Wednesday after leaving the space station aboard the same capsule.

The European Space Agency said last month it was suspending cooperation with Roscosmos over the ExoMars rover mission to search for signs of life on the surface of Mars.