It was supposed to be different this time. 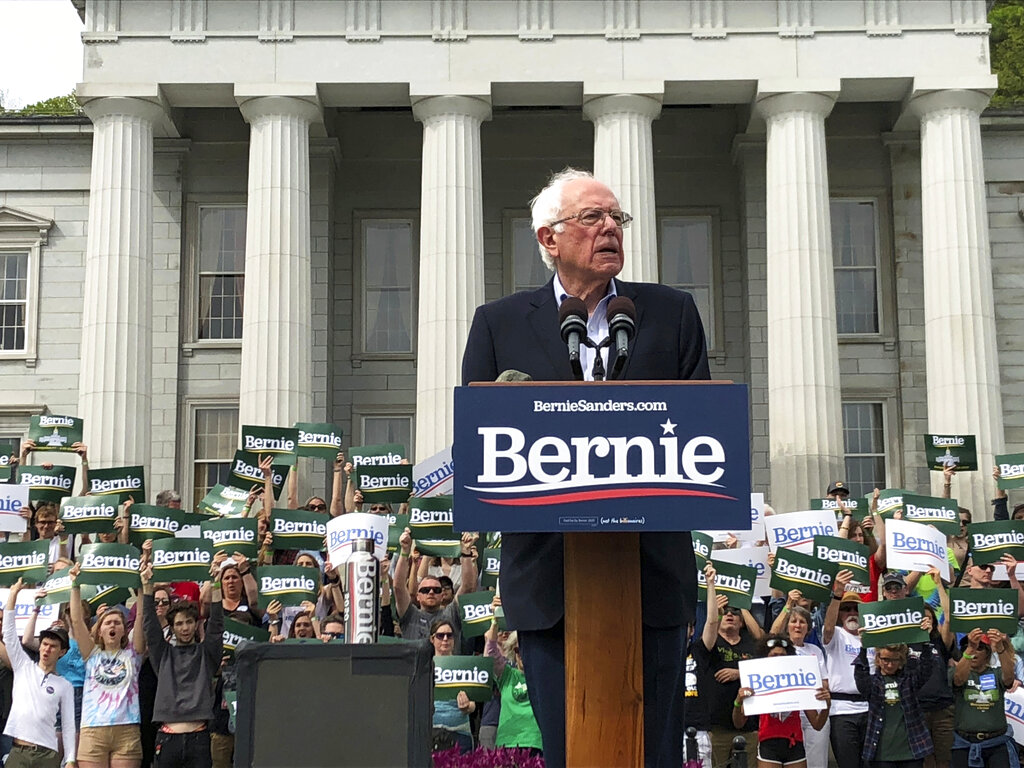 Presidential hopeful Sen. Bernie Sanders held his first home state rally of his 2020 campaign on Saturday, May 25, 2019, in front of the Statehouse in Montpelier, VT. (Photo: AP)

But three months into his second presidential campaign, Vermont Sen. Bernie Sanders is struggling with some of the same challenges that sunk his last bid: doubts about his electability, worries about support from minority voters and an opponent with deep ties to the party establishment.

The 77-year-old entered the Democratic race with an organized donor base, name recognition and experience earned from 2016, giving him an instant edge over his rivals. His front-runner status, however, proved short-lived.

Former Vice President Joe Biden's surge to the top of the pack has exposed Sanders' struggle to expand his appeal. Polls have shown the senator with a grip on a significant slice of Democrats, but there are few signs yet that he is building support.

Sanders is not alone in the stasis. Many in the 23-candidate field are looking for ways to break out of the pack, and Sanders, at least, appears to have an edge over all but Biden. But perhaps more than most others, Sanders and his team have signaled they will not relaunch his campaign or tweak his strategy.

As some of his frustrated rivals made changes, Sanders has stuck close to the message, stump speech and campaign style that powered his failed underdog bid in 2016. His 2020 effort may test whether Democrats are hungry for that do-over or want a new face to rally the left wing of the party against the more moderate Biden.

"We have a very strong path to victory," Sanders said.

He and his team vowed to run a bigger and stronger campaign this time. And, in many ways, he has — charting an aggressive national travel schedule backed by a larger and more diverse campaign team. His team also says it has modest plans to reach African American voters in key early states. He recently finished a tour of the Deep South, bringing his liberal economic message to black voters who largely backed Hillary Clinton in 2016.

Yet Sanders himself sits at the center of any campaign strategy, and the white-haired self-described democratic socialist is well past the point of reinventing himself or his approach. Example A: As he launched his bid, his campaign told reporters he would adopt a more personal tone on the campaign trail, but Sanders quickly returned to his familiar promises to transform a rigged system that favors the rich at the expense of the working class.

"One thing they can say about him across the board is he has been authentic, and he has been consistent," said Nina Turner, a co-chair for Sanders' campaign.

"This time around, the senator has more time," Turner added. "He got into the race late last time, and not only does he have more time, he has almost 100% name recognition as well. The combination of those two things gives him the synergy that he needs to win the primary."

Since launching his campaign a month ago, Biden has emerged as a problem for the entire Democratic field. Polls show that the former vice president is popular among every key demographic, including African Americans as well as the white working class that defected to Donald Trump in 2016.

Sanders' advisers expect Biden to struggle under the weight of his front-runner status once debates begin next month. They view Biden's record on trade, in particular, as problematic among working-class voters in the Midwest. Biden voted to support the North American Free Trade Agreement as a senator and supported several trade deals in the Obama administration that are deeply unpopular with union workers.

Sanders, by contrast, has spent the last quarter century railing against NAFTA and consistently opposed more recent trade deals such as the Trans-Pacific Partnership.

At the same time, Sanders' team knows his standing with black voters could be a problem, particularly in South Carolina, the first Southern state on the presidential primary calendar and one where Clinton bested Sanders by 47 percentage points in 2016.

"You know better than I do that the system is rigged," a smiling Sanders says in a full-page ad that ran in the Carolina Panorama, the Charleston Chronicle and the Black News.

"Racism has been used to divide us up and undermine the power of our working-class majority," Sanders continues in the ad. "Let me be clear: There is no freedom without racial, social and economic equality."

Sanders' liabilities with black voters were clear last month at a forum in Houston dedicated to women of color, where he was booed by the overwhelming black and Hispanic audience when he offered a vague answer about what he would do for black women if elected. Later, there were audible groans when he recounted his youth activism in the civil rights movement.

Some in the audience were disappointed that Sanders offered his standard stump speech and not specific solutions aimed at the audience.

"I'm not really clear on talking point, talking point, talking point, didn't necessarily feel like it came from the heart," Cherisse Scott, 44, of Memphis, said after the forum. "I know that he's been in the game a long time so maybe it's just second nature, but I want to see more. ... When there is a question asked to you directly about black women, I want you to answer the question."

Meanwhile, Sanders faces new headwinds in New Hampshire, a state he dominated in 2016.

His campaign acknowledged the state is a "must win." But recent polls suggest he's trailing Biden while a handful of other Democrats, including Massachusetts Sen. Elizabeth Warren, are within striking distance.

Local Democrats have noticed that Sanders has paid less attention to the state than virtually all his competitors so far; his Monday visit was only his third this year. And as of Monday, he had fewer paid staff on the ground there than little-known former Maryland congressman John Delaney, although more staff announcements are expected soon.

Advisers note that Sanders has been particularly focused on the states that will host primary contests on the first Tuesday in March, so-called Super Tuesday. He heads to one of them, California, for a multiday swing late next week.

It was all about New Hampshire on Monday, however. Sanders returned to the state with an ice-cream-social-themed event in Warner, New Hampshire, where he preached for a half hour to a crowd of hundreds from a stage at a bottom of a hill.

Not everyone in the crowd was a Sanders loyalist. Bobbi Slossar, a 47-year-old librarian, backed Sanders in 2016 and remains excited about him, though she's "also interested to see what the rest of the field holds."

"I was 100 percent committed (to Bernie) last time, and I was a little disillusioned by the process," she said. "And so we'll see what this time holds."

Others, like 55-year-old Elvena Anderson, are still wowed by Sanders despite some disappointments.

"He hasn't been here enough," she said. "I think he should come more."