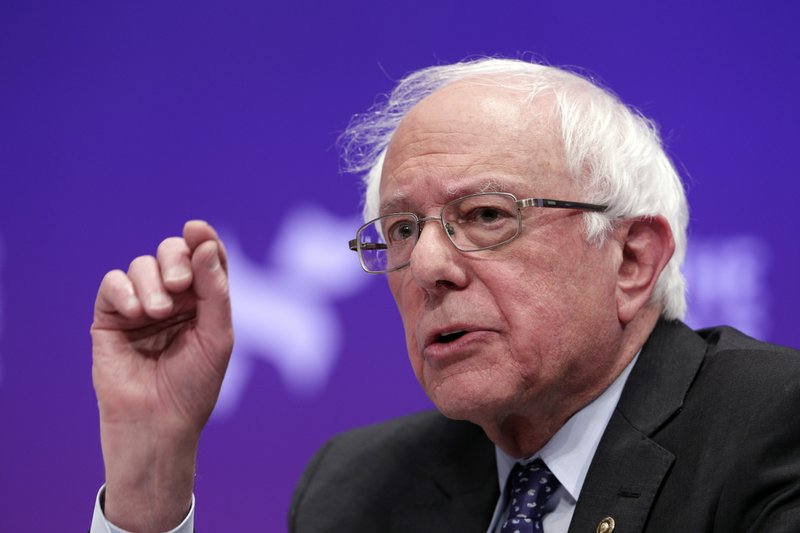 US Democratic presidential candidate Sen. Bernie Sanders, I-Vt., answers questions during a presidential forum held by She The People, on the Texas State University campus in Houston April 24, 2019. (Photo: AP)

The Green New Deal has been blocked in the Senate, and Democratic House leaders refuse to take it up, but activists and politicians who back the sweeping plan to address climate change are pushing to make it a top issue in the 2020 campaign.

Sen. Bernie Sanders of Vermont and Rep. Alexandria Ocasio-Cortez of New York will headline a rally Monday night at Howard University that also features Sen. Ed Markey of Massachusetts and Varshini Prakash, executive director of the Sunrise Movement, the group behind the Green New Deal.

“There is no ‘middle ground’ when it comes to climate policy,” Sanders tweeted Friday. “If we don’t commit to fully transforming our energy system away from fossil fuels, we will doom future generations.”

Washington Gov. Jay Inslee, who has made climate change the centerpiece of his presidential bid, called climate change an urgent crisis, adding, ”‘Middle-ground’ approaches and half measures won’t cut it. We need a large-scale national mobilization to defeat climate change and grow millions of jobs in a clean energy economy.”

Ocasio-Cortez, the chief House author of the Green New Deal, called Biden’s reported approach “a dealbreaker” in a tweet and said there can be no “middle ground” on climate.

“We’re not going to solve the climate crisis w/ this lack of leadership,” she wrote. “Our kids’ lives are at stake.”

A spokesman for Biden’s campaign said the former vice president will soon issue a “bold” plan on climate but declined to give details. As president, Biden would “tackle climate change in a meaningful and lasting way,” said spokesman TJ Ducklo. “Any assertions otherwise are not accurate.”

The Green New Deal, introduced to great fanfare by Markey and Ocasio-Cortez, calls for shifting the US away from fossil fuels such as oil and coal and replacing them with renewable sources such as wind and solar power.

The plan calls for virtual elimination by 2030 of greenhouse gas emissions responsible for global warming and meeting 100 percent of US power demand through renewable and zero-emission energy sources, including nuclear power. The proposal has broad support among Democratic activists and 2020 presidential contenders, putting it at the forefront of the party’s sprawling presidential primary.

Republicans say the plan would devastate the economy and lead to a huge tax increase. They call it more evidence of the creep of “socialism” in the Democratic Party, along with “Medicare for All” and a sweeping elections reform package that would allow public financing of congressional campaigns.

Senators including Markey and Sanders unanimously shunned a chance to take up the Green New Deal in March. Democrats called the vote scheduled by GOP leaders a political stunt, since Republicans widely oppose the plan, and declined to support a procedural motion to consider the nonbinding resolution.

The vote carried its own political risk for Republicans by appearing to mock climate change, an issue that a growing number of Americans care deeply about.

House Speaker Nancy Pelosi, D-Calif., meanwhile, has rejected calls to schedule a vote on the plan and has given no timetable for when or if it will reach the House floor.

Organizers promise a nationwide campaign to make the 2020 election a referendum on the Green New Deal, with a “major demonstration” planned at a Democratic presidential debate in Detroit in July.