White House Press Secretary Sarah Sanders said Sunday the president wants to explore a twice-rejected proposal to send migrants to "sanctuary cities," but it was not the preferred solution to fix the straining immigration system.

Sanders said it was one of many options on the table, though she hoped the solution would be for Congress to work with the president on comprehensive immigration reform. The Trump administration is dealing with an ever-increasing number of Central American migrants crossing the US-Mexico border that has pushed the immigration system to the breaking point. 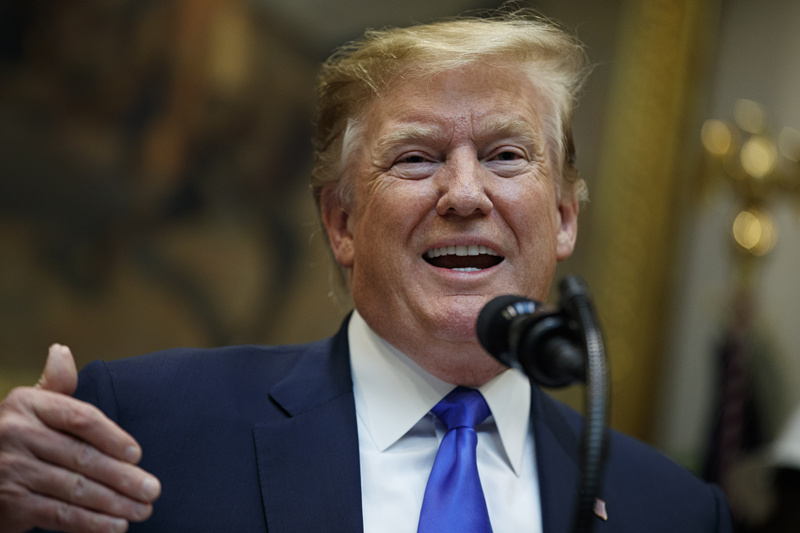 US President Donald Trump gestures as he speaks about the deployment of 5G technology in the United States during an event in the Roosevelt Room of the White House, Friday, April 12, 2019, in Washington. (Photo: AP)

Laws make it hard to quickly return migrants, and many spend years in the US waiting for their immigration cases to play out. Others claim asylum and wait just as long, living and working in the US as they wait.

Trump seized on reports last week of the proposal that sought to send migrants already detained to Democratic locations or transport migrants that have just crossed the border to sanctuary cities.

Sanders said the idea would be to spread out the number of migrants so the strain would not be on "one or two border communities."

"The president likes the idea and Democrats have said they want these individuals into their communities so let's see if it works and everybody gets a win out of it," Sanders said. "Again, this is not the ideal situation."

Trump tweeted on Saturday evening that the US had the "absolute legal right to have apprehended illegal immigrants transferred to Sanctuary Cities."

But the plan had already been eschewed twice. People with knowledge of the discussions say it was first brought to Homeland Security from White House staff in November, and was again discussed in February but was put down after DHS officials reviewed it and found it was too costly, a misuse of funds and would be too timely. The people were not authorized to speak publicly and spoke to The Associated Press on condition of anonymity.

And it could actually make it more difficult for Immigration and Customs Enforcement officers to arrest people facing deportation, because so-called sanctuary cities do not work with ICE.

The Transactional Records Access Clearinghouse at Syracuse University announced last week that an analysis found that immigrants in sanctuary cities such as New York and Los Angeles are 20% less likely to be arrested out in the community than in cities without such policies.

Democrats blasted the proposal as a political stunt that used human beings as pawns. House Homeland Security Chairman Bennie Thompson questioned the legality of the proposal.

"This is again his manufactured chaos that he's created over the last two years on the border," Thompson said, adding Democrats were more than willing to sit down and talk about immigration legislation.

Thompson made the comments on ABC's "This Week." Sanders also spoke on ABC and "Fox News Sunday."