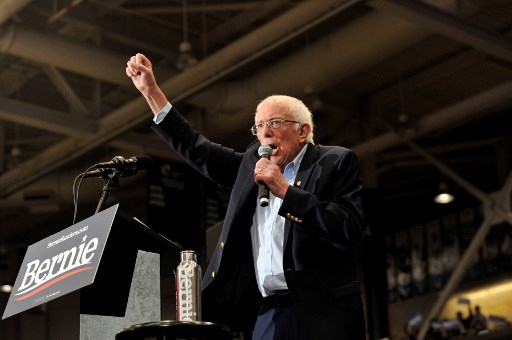 Leftist Bernie Sanders was leading the pack ahead of Midwestern moderates Pete Buttigieg and Amy Klobuchar Tuesday as polls closed in New Hampshire's critical Democratic primary in the race to challenge President Donald Trump in November.

White House hopefuls were seeking much-needed clarity in the Granite State after the first-in-the-nation Iowa vote devolved into chaos last week, with Sanders and Buttigieg emerging neck-and-neck after a days-long delay in the count.

With a quarter of polling stations reporting just after 8:00 pm (0100 GMT Wednesday), Sanders was at 28 percent in the state where he routed Hillary Clinton in 2016.

Indiana ex-mayor Buttigieg and Minnesota senator Klobuchar were some distance behind at 23 and 21 percent respectively.

After months atop the pack, Biden had already conceded he expected to do badly in New Hampshire, as he did in Iowa -- and the former vice president's worst fears were justified as he was running a lowly fifth at just 8.6 percent.

Tech entrepreneur Andrew Yang, always an outsider, suspended his campaign after it emerged he was failing to make an impact.

"You know I am the math guy, and it is clear tonight from the numbers that we are not going to win this race," he said as the preliminary results placed him eighth with three percent.

New Hampshire is home to just 1.3 million people but it is a battleground with an outsized influence on the political landscape due to the timing of its primary.

The 78-year-old Sanders, from neighboring Vermont, went into the race as the newly anointed national frontrunner.

While Sanders was expected to win, a solid second place for Buttigieg could provide the biggest bounce from New Hampshire, after he won narrowly in Iowa.

Buttigieg is languishing at 10 percent in the latest national polls and has negligible support among African Americans in more diverse upcoming battleground states.

Pundits believe this vital constituency will start to take a serious look at the ex-mayor from the Midwestern state of Indiana if he comes out as winner in both of the opening races.

Klobuchar's popularity in New Hampshire has surged since a strong debate on Friday, moving her ahead of liberal Elizabeth Warren (9.3 percent).

Biden, stung by his inauspicious start to the primary season, raised eyebrows by canceling a primary-night party to head straight on to his stronghold of South Carolina.

"I'm not giving up on New Hampshire," insisted the 77-year-old -- who is sliding in the polls and hopes to leverage his popularity among the more diverse electorates of Nevada and South Carolina.

A light snow fell at a Boys and Girls Club in the state capital Concord, as people showed a voter ID, received a paper ballot and went to one of 33 voting booths curtained by red, white and blue plastic or to table top voting spots.

Mike Schowalter, a 39-year-old conservative, said he voted for Sanders, a self-declared democratic socialist who critics complain is proposing a health care overhaul and other sweeping ideas that are just too expensive.

"It does seem kind of strange, but I do think a lot of stuff going on in our country right now is a bit broken," Schowalter told AFP. "I think he'll get us talking."

"New Hampshire, the choice you make today will shape our nation's future," Buttigieg tweeted as polling began on Tuesday, depicting himself as a fresh new force that can lead a drive to beat Trump.

Complicating Tuesday's vote, independents -- who outnumber both Democrats and Republicans in the state -- can vote in either primary, potentially tipping the scales in a tight race.

Buoyed by a strong Iowa showing, Sanders has emerged as the national Democratic frontrunner with 25 percent support, according to a new Quinnipiac University poll which described it as a "dramatic shift."

Biden has skidded from 26 to 17 percent support since the end of January.

Competing for the support defecting from Biden, Bloomberg is focusing on Super Tuesday on March 3, when 14 states vote -- spending a record $260 million of his personal fortune on his campaign.

Asked about Bloomberg running, Sanders told NBC in an interview Tuesday that he had "a real problem with multibillionaires literally buying elections."

"I don't begrudge his wealth, but I do begrudge a billionaire thinking he can buy the election," said Sanders, who earned just under $3 million from 2016-2018.

"He has every right in the world to run for office... But he doesn't have the right to buy an election. This is exactly the problem with American politics."