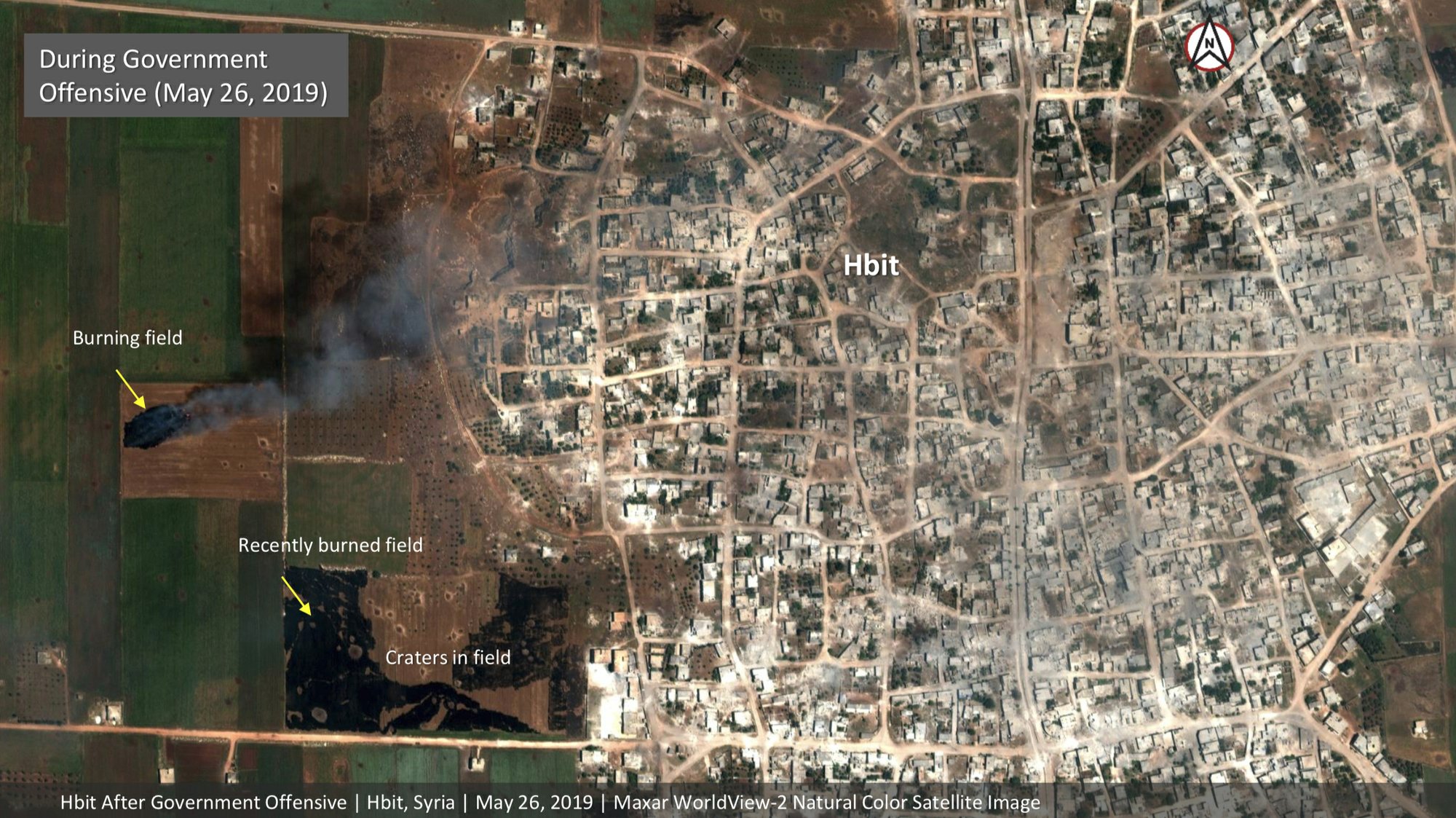 This satellite image provided by Maxar Technologies on Tuesday, May 28, 2019 shows significant damage to Habeet, Syria on May 26 as a result of a government offensive against the last rebel stronghold in the country. (Photo: AP)

New satellite photos obtained on Tuesday show significant damage to Syrian villages and surrounding farmland as a result of a government offensive on the last rebel stronghold in the country.

The images, provided to The Associated Press by the Colorado-based Maxar Technologies, show fires in olive groves and orchards during harvest season around Kfar Nabudah and nearby Habeet, two villages on the edge of Idlib province where the latest fighting has focused.

The fires were apparently sparked by intense bombing in the area.

Fighting has raged in Idlib and surrounding areas since April 30 when Syrian troops began pushing into the enclave from the south while unleashing a wave of intense bombing over the overcrowded area. For President Bashar Assad, Idlib stands in the way of final victory against armed government opposition after eight years of civil war.

The satellite photos, which show the area over the past week, show destroyed buildings and a mosque in Kfar Nabudah, which appears surrounded by farm fields, some still burning. Most of the damaged fields appeared north of Kfar Nabudah. In Habeet, farms are pocked by craters, while others appear set on fire.

Kfar Nabudah fell under government control on Sunday. Activists, experts and Maxar say the crop burning is part of a “scorched earth” campaign that adds to the hardship of 3 million people in the rebel stronghold.

The UN said fires, triggered by bombings, destroyed staple crops such as wheat and barley, compounding the already fragile humanitarian conditions in the area.

On Tuesday, the Idlib health directorate said government rockets hit a hospital in the town of Kfar Nubul, causing extensive damage to the facility and to its generators and cars parked outside. The directorate said the hospital is currently not functioning.

In videos shot by the Syrian Civil Defense, known as White Helmets, fire fighters battle a raging fire in one of the hospital generators as a thick plume of smoke rises above.

This brings the total number of regional health facilities directly hit in the offensive to 21, including at least five which the UN had identified as medical centers.

Amnesty International has said that attacks on health facilities in opposition-held areas in Syria are part of a well-established pattern by government forces and their allies.

The White Helmets also reported that at least seven people were killed in sporadic bombings around the stronghold on Tuesday. Rescuers continued to search for two inhabitants of a building that was bombed a day earlier in Ariha village, struggling to remove the pulverized rubble from the narrow streets. At least 11 were killed in the bombing.

The UN says the violence has exacted a heavy toll on civilians, displacing more than 200,000 and targeting health facilities and schools. The UN Office for the Coordination of Humanitarian Affairs said nearly 1.3 million residents of the enclave had already been displaced by violence in other parts of Syria.

“The potential longer-term impact on the civilian population may be compounded as the violence is occurring during the harvest season,” it said. “As the hot summer weather sets in, more fires can occur, further disrupting normal food production cycles and potentially reducing food security for months to come.”