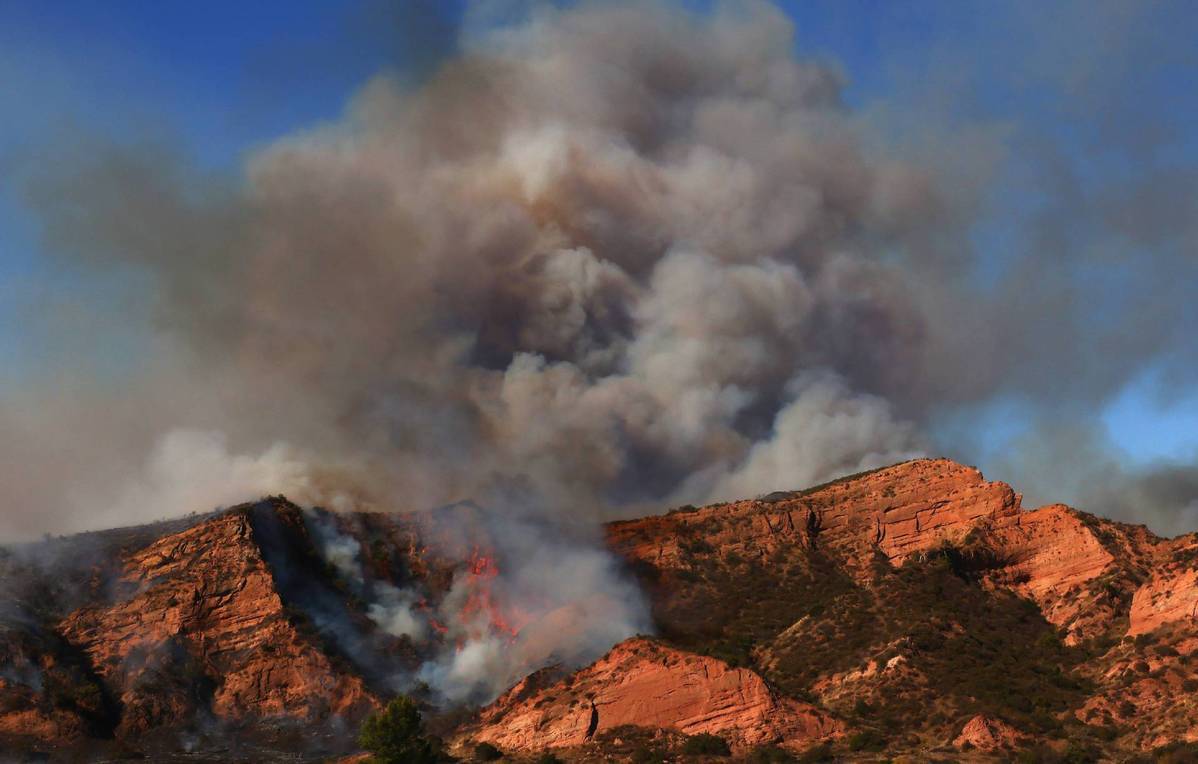 The Bond Fire burns in the Silverado Canyon area of Orange County on December 3, 2020 near Irvine, California. (Photo: Agencies)

"As more area burns at high severity, the likelihood of conversion to different forest types or even to non-forest increases," said the lead author of the new study, Sean Parks, a research ecologist with the U.S. Forest Service's Rocky Mountain Research Station (RMRS).

In the article "Warmer and Drier Fire Seasons Contribute to Increases in Area Burned at High Severity in Western US Forests From 1985-2017," which was published recently on the RMRS's website, researchers tried to draw correlations between heat and fire intensity with potential forest regrowth.

Using satellite imagery, the study has received international attention, as the duo analyzed "high severity" burn areas over a 35-year period in America's West for the first time.

The 2020 fire season is finally winding down as snow had blanketed Colorado and cooler temperatures relief in California, however, data shows that damage has been done.

According to the latest data updated by the National Geographic Area Coordination Center on Thursday, nearly 14 million acres (about 56,656 square kilometers) have burned across the United States, twice the 10-year average and the most acres burned since reliable record-keeping began in 1983.

In addition, five of the six largest fires in California history and three of the four largest in Colorado history all burned this year.

Meanwhile, California has also seen worse devastation, with 4,359,517 acres (about 176,423 square kilometers) torched by a staggering 9,485 fires, with 10,488 structures destroyed or damaged and at least 31 fatalities.

According to the California Department of Forestry and Fire Protection, 2020 was the largest wildfire season recorded in the state's history.

The dramatic increase in the acres burned by immense wildfires is being driven by fires which are burning hotter and more intensely than they used to, according to Parks, and the drier post-fire climate is making it increasingly difficult for seedlings to establish and survive. This makes it harder for forests to return to their pre-fire condition.

As a result of the more severe fires in recent years, in a 2019 study, Parks has found up to 15 percent of inter-mountain forests in the western United States are at risk of disappearing. In drier regions, like the deserts of the southwestern states, that number increases to 30 percent because fires tend to burn there under even more extreme weather.

Park's study concluded that when heat from the fires produces extreme temperatures, the likelihood of forest regeneration is more remote.

"During a severe fire, even the most well-adapted trees can be overwhelmed by the extreme heat. If too many trees die, forest regrowth can be hampered by the lack of viable seeds," the study noted.

Scientists agree that wildfires are a natural and healthy aspect of forests, and that cyclical fires act to eliminate the less healthy parts of the ecosystem, recycle nutrients back into the soil and clears out overgrown vegetation, but not when forests are parched and no water is coming.