WORLD Saudi announcement over journalist's death hailed by US president, but Congress has reservations

Saudi announcement over journalist's death hailed by US president, but Congress has reservations 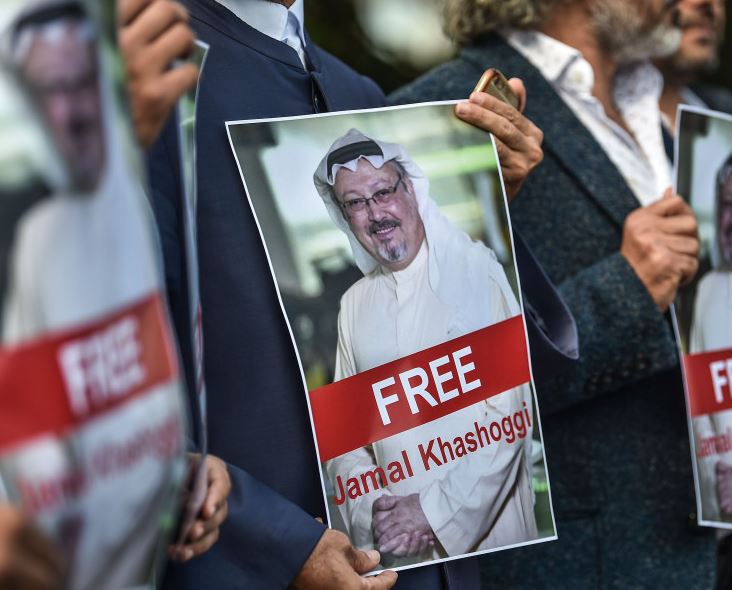 Protestors hold pictures of missing journalist Jamal Khashoggi during a demostration in front of the Saudi Arabian consulate in Istanbul on Oct. 5, 2018. (Photo: AFP)

WASHINGTON, Oct. 19 (Xinhua) -- US President Donald Trump on Friday recognized Saudi Arabia's announcement about the death of a journalist Jamal Khashoggi as a "good first step," amid widespread suspicion from the US media and Congress.

Trump told the media in an event in Arizona that Saudi Arabia's explanation was credible and a "good first step," but what had happened to Khashoggi was "unacceptable."

The initial investigations by the Saudi Public Prosecution revealed that Khashoggi had a physical fight with those he met at the Saudi consulate in Istanbul, which led to his death, resulting in the arrest of 18 people.

He added that he would talk to the Saudi crown prince before he takes next steps, explaining that Saudi Arabia has been helping the United States counter Iran and buying US weapons.

"It's early, we haven't finished our review or investigation," he said.

Trump said that he'll work with Congress on what the US response should be, but he'd prefer not to hurt American companies and jobs by cutting billions of dollars in arms sales to the kingdom.

After Saudi Arabia released the statement, US Republican Senator Lindsey Graham, also Trump's close ally, noted via Twitter that "to say that I am skeptical of the new Saudi narrative about Mr. Khashoggi is an understatement."

"It's hard to find this latest 'explanation' as credible," Graham said.

A high-ranking Democratic lawmaker, Adam Schiff, also said that Saudi Arabia's claim was not credible, noting that if the Trump administration fails to hold Saudi Arabia accountable, Congress will.

Democratic senator Chris Van Hollen called the Saudi statement a cover-up, noting "the United States must not be complicit in this cover-up. Looking forward to what our intelligence agencies have to say."

The wrangle between the Trump administration and Congress over the case appears ongoing.

POLITICO, a US media outlet, reported earlier on Friday that the Trump administration has told Chairman of Senate Foreign Relations Committee Bob Corker that he could not view recent US intelligence regarding Khashoggi's disappearance.

Corker, also a Republican, said on Thursday that the administration's information "clampdown" can't go on.

"There has been a clampdown on any further intelligence updates to senators ... it can't go on that long, they need to come out and share their views of what happened and share with us," Corker said.

The case of Khashoggi, a journalist and columnist for The Washington Post, has become a major source of tension between Saudi Arabia and the West.

Khashoggi has been missing since he entered the Saudi consulate in Istanbul on Oct. 2. Unconfirmed reports said that Khashoggi was likely killed inside the compound, a claim denied by Saudi officials as "baseless."