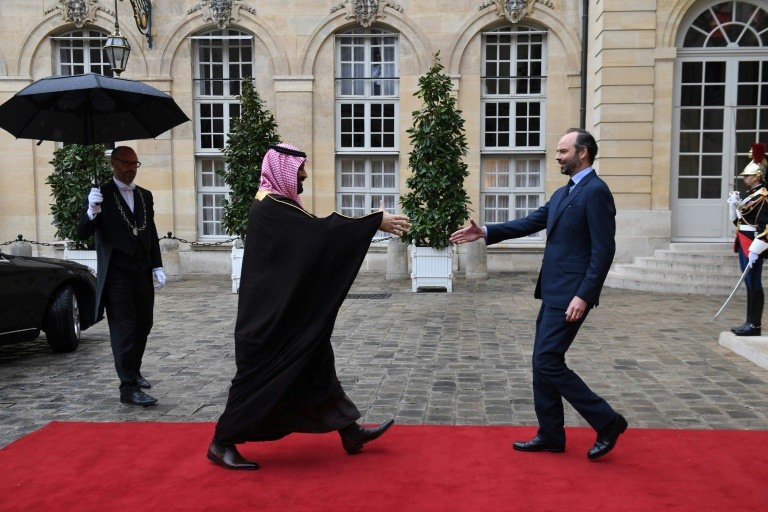 Saudi Arabia is to use French expertise to set up a national opera and orchestra under an agreement signed Monday that underlined the modernising agenda of the kingdom's crown prince as he began his official trip to Paris.

The deal will see the Paris opera company help the ultra-conservative Islamic nation produce its own classical music and shows, a further sign of Crown Prince Mohammed bin Salman's desire to change the image of his homeland.

He has already announced the lifting of a ban on women driving, the re-opening of cinemas for the first time in over three decades and new mixed-gender concerts despite opposition from religious hardliners.

The kingdom revealed Monday that it would enter short films at the Cannes cinema festival for the first time and send an official delegation to the celebration of often edgy and subversive silver-screen art on the Riviera this May.

Speaking with her Saudi counterpart, French Culture Minister Francoise Nyssen said she had also discussed "the importance of translating books in both directions, from Arab into French and French into Arab."

Prince Mohammed, known widely by his initials MBS, dined with President Emmanuel Macron at Paris's historic Louvre museum on Sunday night after flying in on his first trip to France as the heir to the Saudi throne.

Macron, 40, faces a diplomatic tightrope in talks with the prince as he seeks to bolster his ties with the world's top oil exporter, while also managing relations with the kingdom's arch-rival Iran.

The prince's visit is part of a global tour that has seen him travel to the United States, Britain and Egypt as he seeks to project a more moderate vision of his country which is often associated in the West with exporting jihadist ideology.

Saudi and French aides had stressed before the trip that cultural ties, as well as new business opportunities, would be at the heart of two days of talks between government and private-sector figures from both countries.

In February, Saudi Arabia's General Entertainment Authority (GEA) announced it would stage more than 5,000 festivals and concerts in 2018, double the number of last year, and pump $64 billion in the sector in the coming decade.

The kingdom has hosted a series of concerts in recent months by artists such as Lebanon's Hiba Tawaji, legendary Greek composer Yanni or Egyptian pop sensation Tamer Hosny, albeit it with warnings to music-lovers that dancing is prohibited.

The announcement about the Cannes film festival came after Prince Mohammed dined at media mogul Rupert Murdoch's house last week in the US along with studio bosses from Hollywood and famed American actors including Morgan Freeman.

"With a rich tradition of storytelling, Saudi Arabia is embarking on the development of a sustainable and dynamic (film) industry," Culture Minister Awwad Alawwad said in a statement sent to AFP on Monday.

Amid the flurry of announcements, campaigners were mobilised to keep attention focused on French weapons exports to Saudi Arabia and rights abuses in the country.

The kingdom is the lead partner in a coalition of countries bombing and blockading Yemen, where a combination of fighting, disease and food shortages has led it to be dubbed the world's worst humanitarian crisis by the UN.

Three out of four French people believe it is "unacceptable" for France to continue selling weapons to Saudi Arabia, according to a poll last month by independent research group YouGov.

Amnesty International also took out a full-page advertisement in the Liberation newspaper on Monday, featuring the feet of an executed prisoner, which urged Macron to talk about human rights with Prince Mohammed.

Ahead of prince Mohammed's trip to France, Saudi officials suggested relations were strong between him and Macron, both young leaders with reformist agendas.

But the trip follows a period of underlying tensions.

Macron waded into a regional crisis last November when Lebanon's Prime Minister Saad Hariri tendered his resignation on live television from Riyadh, apparently under pressure from the crown prince.

Macron invited Hariri to Paris for talks and he later rescinded his resignation, a development that analysts say exposed the limits of the prince's authority.

Macron has also announced he plans to be the first French president to visit Iran since 1976 as he seeks to build relations with the two competing regional powers in the Middle East.