Saudi Arabia agreed to let Turkish authorities search its Istanbul consulate as part of the investigation into the disappearance of journalist Jamal Khashoggi, as his fiancee asked Donald Trump to help uncover what happened to the Riyadh critic. 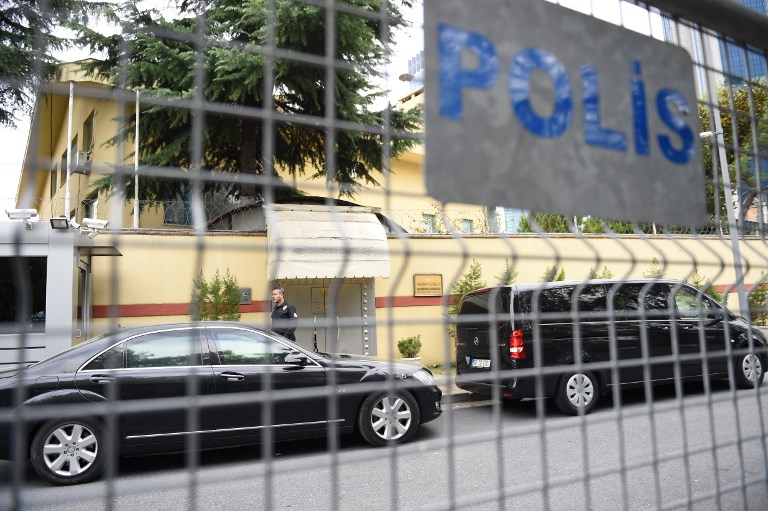 The front entrance of Saudi Arabia's consulate in Istanbul on October 9, 2018 is pictured through a police fence as demonstrators gather outside to mark their protest after the disappearance of Saudi journalist Jamal Khashoggi in Istanbul, blamed on Saudi authorities. (AFP)

There has been fierce speculation over what happened to Khashoggi, a Washington Post contributor who wrote for Arab and Western media, after he vanished on October 2 following a visit to the consulate to obtain official documents.

While Riyadh claimed he had left the consulate after his visit, Turkish police said Khashoggi did not emerge from the building.

Government sources said police believe the journalist was killed inside the consulate, claims which Riyadh dismissed as "baseless".

"Saudi authorities said they were open to cooperation and that a search can be conducted at the consulate building," the Turkish foreign ministry spokesman Hami Aksoy said in a statement on Tuesday.

The search will take place as part of the official investigation, which was being conducted "in an intense manner", he said without giving any date.

Khashoggi's fiancee Hatice Cengiz wrote in an opinion piece for The Washington Post that she was "confident in the abilities of Turkish government officials".

Trump on Monday expressed concern about Khashoggi's case and Secretary of State Mike Pompeo called for a thorough investigation.

Turkish police were looking into two private aircraft which landed at Istanbul's Ataturk airport on October 2 at different times carrying 15 people of interest in the case, as well as the possibility that Khashoggi was kidnapped and taken aboard one of the planes, local media reported.