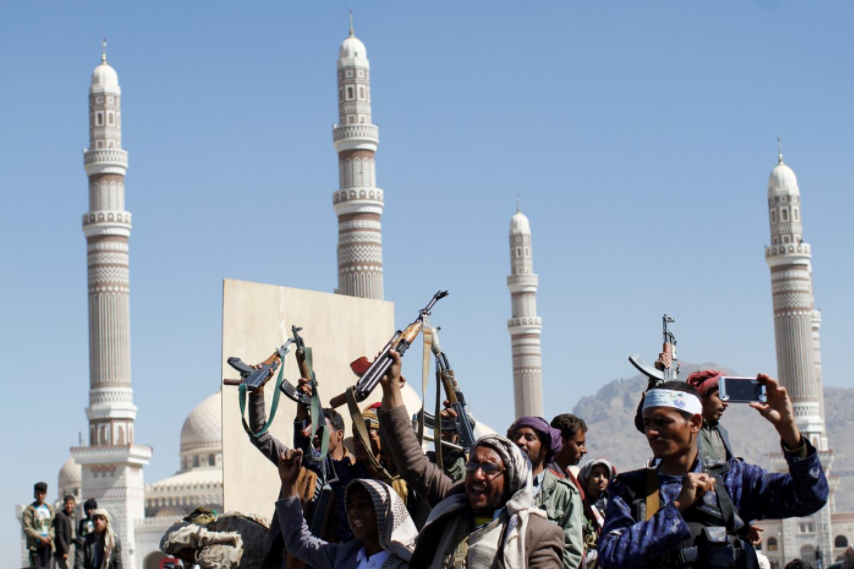 Houthi fighters attend the funeral of their fellow who were killed during the recent clashes in Sanaa, Yemen December 7, 2017. Photo: REUTERS /Mohammed Al-Sayaghi

A Western-backed Saudi-led coalition scored its first major gains in Yemen since former President Ali Abdullah Saleh was killed on Monday when local fighters captured an area on the Red Sea coast from Houthi rebels, residents said on Thursday.

Saleh, who had made common cause with the Houthis after they captured the capital Sanaa in 2014, switched sides in an announcement last week that plunged the country deeper into turmoil.

Houthi forces control Sanaa and much of the rest of the impoverished country, where three years of war has killed more than 10,000 people and brought it to the verge of famine.

Saleh had helped the Houthis win control of Sanaa and much of the north and his decision to abandon them had major implications on the battlefield.

The Houthis crushed a pro-Saleh uprising in the capital and shot him dead in an attack on his convoy on December 4.

Saleh’s body remained at a military hospital in Sanaa while the Houthis - who control the capital - and members of his party sparred over burial plans, sources close to the family said.

The sources said the Houthis had demanded that Saleh’s body be buried in a family ceremony at his home village of Sanhan, south of Sanaa, while the family was insisting that the Houthis hand over the body without any conditions.

The Houthis said they had found stashes of gold and cash at Saleh’s residence, which they had over-run and seized before his death on Monday, and confiscated it for the benefit of the state treasury. The group gave no details on the amount and the report could not independently be verified.

UN-appointed investigators said in 2015 that Saleh was suspected of having corruptly amassed as much as $60 billion, equivalent to Yemen’s annual GDP, during his 33 years in office.

The US and UK-backed Saudi-led coalition has stepped up air strikes on Yemen since Saleh’s death as Houthi forces have tightened their grip on the capital.

Residents said fighters known as the Southern Resistance, together with other local forces and backed by coalition advisers from the United Arab Emirates, launched attacks on al-Khoukha on Wednesday.

At least 25 people from both sides were killed before Yemeni fighters captured the town of al-Khoukha and a small fishing port.

A spokesman for the Houthi movement could not immediately be reached for comment.

The Houthi-run Saba news agency has reported heavy air strikes by the coalition on Sanaa and in the Saada province in northern Yemen, but made no mention of any ground offensive in al-Khoukha area.

Saba reported at least seven members of the same family killed in an air strike on their house in Nihem district outside Sanaa, including three children. It was not possible to independently verify the report.

A Saudi-led coalition air strike on al-Khoukha in March killed at least 22 civilians.

When Saleh switched sides he announced he was ready to end a nearly three-year-old war - widely seen as a proxy war between regional rivals Saudi Arabia and Iran - if the Saudi-led coalition agreed to stop attacks on the country.