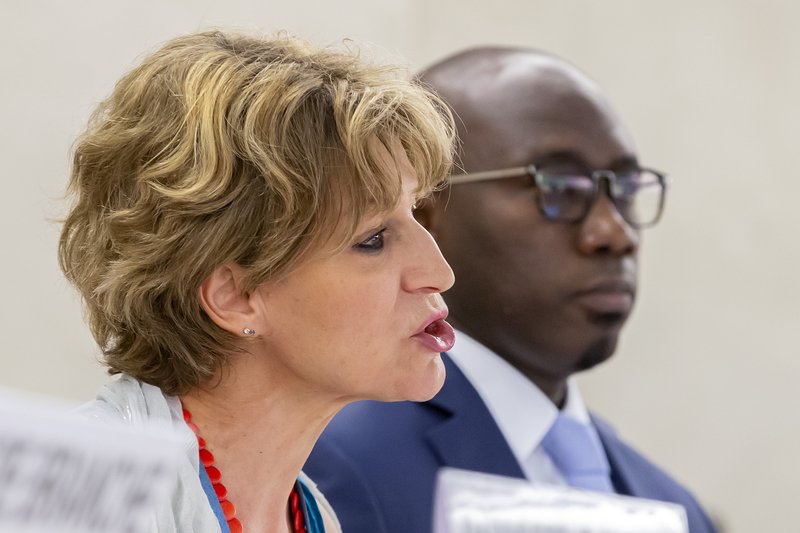 A top Saudi diplomat lashed out Tuesday at an independent UN expert’s searing report alleging that Saudi Arabia was responsible for the killing of Saudi journalist Jamal Khashoggi, saying it was based on “prejudice and pre-fabricated ideas.”

In what amounted to a face-off at the UN’s top human rights body, Ambassador Abdulaziz Alwasil insisted that special rapporteur Agnes Callamard had failed to follow proper procedures and used flawed sourcing in her 101-page report made public last week.

“Accusations have been launched, and fingers have been pointed — (she is) supporting herself on non-credible articles or sources,” he told the Human Rights Council, in Arabic through a UN interpreter.

Callamard, sitting at the council podium to present her report, retorted that her methodology had respected precedent and insisted her report wasn’t based on media reports. She also said she hadn’t received any responses in writing from Saudi authorities to her report.

The report by Callamard, an independent expert on extrajudicial and arbitrary killings, alleged that Saudi Arabia bears responsibility for The Washington Post columnist’s grisly apparent dismemberment by Saudi agents at the kingdom’s consulate in Istanbul in October. It said Crown Prince Mohammed bin Salman’s possible role in the killing should be examined, and Callamard used Tuesday’s presentation to push for further investigation.

She also wrote that Saudi Arabia, which has put 11 people on trial in non-public proceedings, shouldn’t be allowed to mete out justice alone in a case with vast international implications — and called for a “proper authority” to determine if crimes had been committed.

Callamard said the Saudi trial should be suspended because it fails to meet procedural standards.

The Saudi ambassador rejected that.

“This is something that is set against Saudi Arabia, it’s based on prejudice and pre-fabricated ideas,” he said. “This is why we reject any attempt to remove this from our national justice system in Saudi Arabia.”

Among diplomats speaking out Tuesday, European Union ambassador Walter Stevens called on Saudi Arabia “to disclose all information available,” and “fully cooperate” with investigations into the killing, and Ralf Schroeder of Germany said “nothing can justify this killing, and we condemn it in the strongest possible terms.”

Russia’s representative, Yaroslav Eremin, questioned the focus on journalists, dissenters and others, wondering aloud if the lives of regular citizens were “less valuable.” Yusuf Abdulkarim Bucheeri of Bahrain rallied to the defense of its big Arab neighbor, insisting Saudi Arabia had shown “full transparency from the outset.”

The Trump administration pulled the US out of the council a year, alleging it has an anti-Israeli bias among other complaints.

Her voice trembling in English, Khashoggi’s fiancee Hatice Cengiz, intervening on invitation by a non-governmental organization, told the council that “those who are behind the murder and cover-up should face punishment.”

“It was not only my beloved Jamal who was murdered that day, but also democracy, human rights and freedoms,” she said.