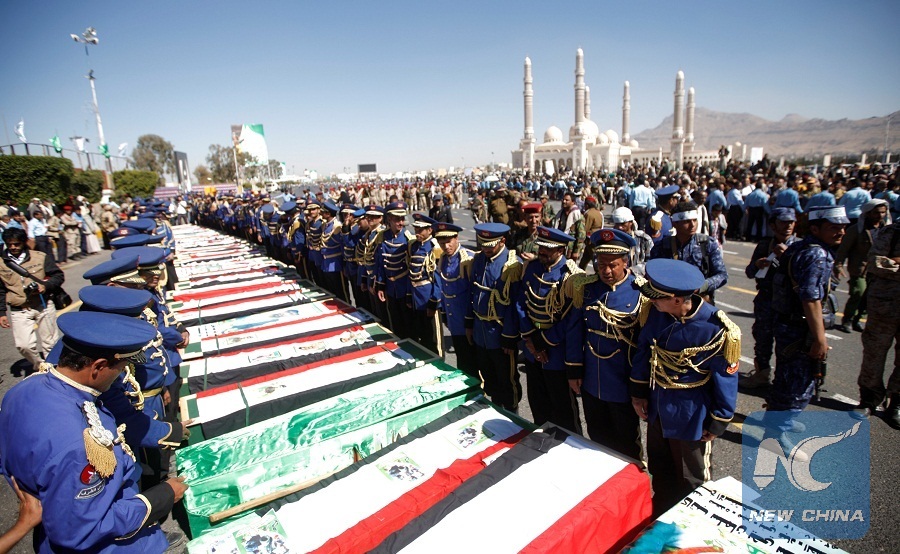 Houthi fighters attend the funeral of their fellow who were killed in Saudi-led airstrikes at end-2017 in Sanaa, Yemen. Photo: Reuters

Up to 45 militants of the Shiite Houthi group were killed as Saudi-led airstrikes hit their locations in two provinces of Yemen over the past 24 hours, a Yemeni government official told Xinhua.

"In the past 24 hours, about 20 Houthi rebels were killed when aerial bombardment hit their locations in the central province of al-Bayda, where fighting is still going on," the local government official said on condition of anonymity.

Elsewhere in Yemen, more than 25 Houthi rebels were killed and nearly 15 others injured when intensified air raids targeted their sites in the country's western coast areas near Hodeidah province.

The Saudi-led warplanes also destroyed weapons and armored vehicles belonging to the armed Houthi militants during the air raids in the past 24 hours.

Meanwhile, a medical source told Xinhua that Aljumhuriah public hospital in Aden "received scores of injured soldiers loyal to the Saudi-backed Yemeni government coming from the battlefield with Houthis on the western coast."

Earlier this month, the Houthis lost control over key areas including the Bayhan district of oil-producing Shabwa province during an all-out campaign launched by Saudi-backed troops.

The Saudi-led military coalition has intensified military air campaign against Houthi positions in and around the Houthi rebels-held capital Sanaa and other northern provinces since the Houthis killed former President Ali Abdullah Saleh on Dec. 4.

The coalition has intervened in the Yemeni conflict in March 2015 to roll back Iranian-aligned Houthi rebels, and backed internationally-recognized President Abd-Rabbu Mansour Hadi whom Houthis forced into exile in Saudi Arabia.

The war has killed over 10,000 Yemenis, mostly children, displaced 3 million, and triggered the world's most humanitarian catastrophe.

Tensions have escalated in Sanaa and other northern provinces after Houthis killed their top ally strongman Saleh after he changed alliance and backed the anti-Houthi coalition.