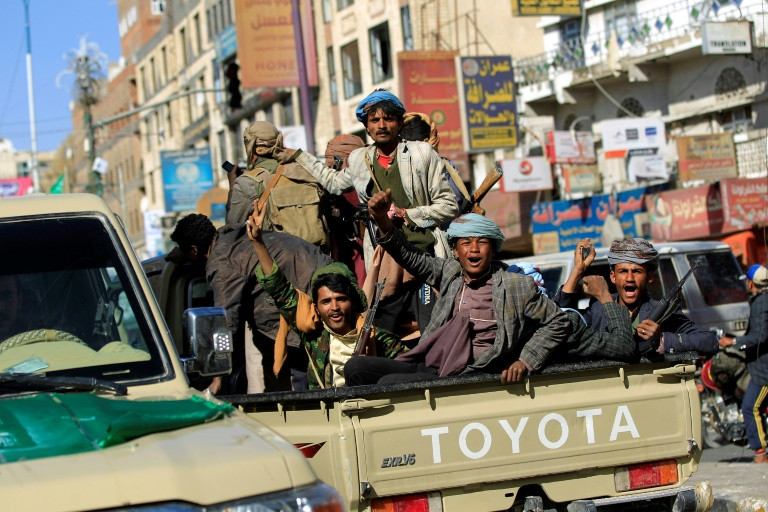 Huthi rebel fighters are seen in the Yemeni capital on December 4, 2017. Photo: AFP

Saudi Arabia said it shot down a ballistic missile Tuesday over Riyadh fired from Yemen by Iran-backed Huthi rebels, who announced that the target was the official residence of King Salman.

The audacious attack aimed at the heart of Saudi power follows the downing of another missile last month near Riyadh airport that triggered the tightening of a Saudi-led blockade on hunger-stricken Yemen.

For the past three years Saudi Arabia has led a military campaign involving air strikes and ground troops against the Huthis, who seized the Yemeni capital from the internationally recognised government in 2014.

The kingdom accuses the Shiite rebels of being a proxy for its arch foe Iran, which vehemently denies arming the insurgents.

An AFP correspondent in Riyadh heard a loud explosion at 1050 GMT, shortly before King Salman was due to oversee the unveiling of the Saudi annual budget.

"The missile was aimed at populated residential areas in the Riyadh area, and -- thank God -- was intercepted and destroyed south of Riyadh without any casualties," the official Saudi Press Agency quoted a spokesman for the Saudi-led coalition as saying.

"The possession of Iranian-manufactured ballistic weapons by terrorist organisations, including the Iran-backed Huthi militia, is a threat to regional and international security," Turki al-Maliki added.

More than 8,750 people have been killed since Saudi Arabia and its allies joined the government's fight against the Huthis in 2015, triggering what the UN has called the world's worst humanitarian crisis. 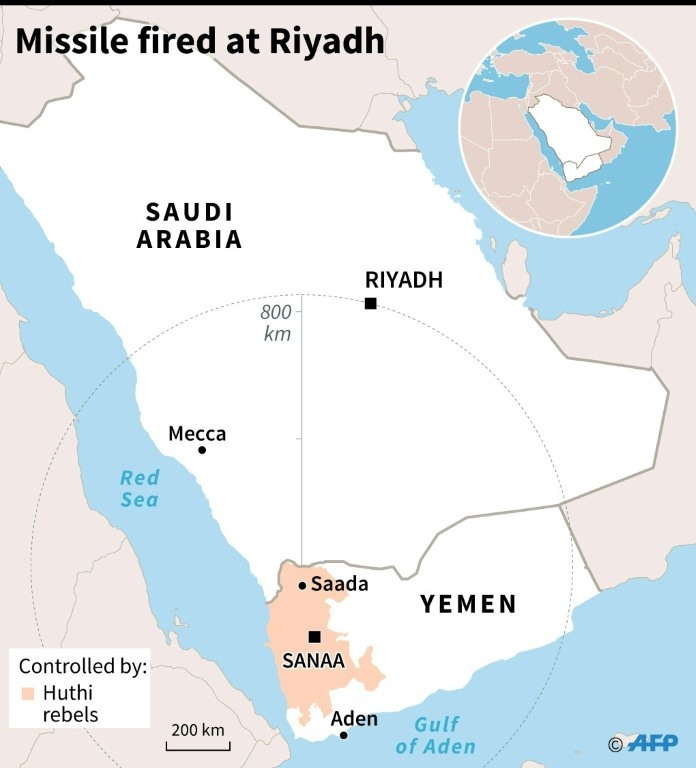 "In exchange for a thousand days of bombardment with internationally banned weapons, there has been a thousand days of steadfastness in which our people have demonstrated that their resolve will not be broken," rebel chief Abdulmalik al-Huthi said in a speech Tuesday.

"Today our people reached the heart of Riyadh – the government palace – with a ballistic missile."

The missile attacks, which could further escalate the Saudi-led military campaign, underscore how the raging Yemen conflict is increasingly spilling across the border.

On Thursday, US ambassador to the United Nations Nikki Haley presented what she called "undeniable" evidence that the missile was "made in Iran".

But her comments went beyond the findings of a UN investigation which reached no firm conclusion on whether the missile came from an Iranian supplier, saying only that it had a "common origin" to some Iranian designs.

Residents in the Saudi capital reported hearing a loud explosion and seeing smoke after Tuesday's attack.

"I was in my office when I heard a big bang," said Tomas Kompikan, one of the many foreign workers in Riyadh.

"Suddenly after around 30 to 45 seconds I heard a next sound... and we saw a white smoke."

The Huthi rebels last month warned that they considered "airports, ports, border crossings and areas of any importance" in Saudi Arabia, as well as its ally the United Arab Emirates, as legitimate targets.

Saudi-led air strikes have intensified since the December 4 killing of ex-president Ali Abdullah Saleh at the hands of the Huthis after his alliance with the rebels collapsed.

The UN human rights office said Tuesday it was "deeply concerned" by the surge in civilian casualties due to intensified coalition air strikes.

UN rights chief Zeid Ra'ad Al Hussein told AFP a combination of the violence and the blockade the coalition imposed on rebel-held ports last month had created "a horrifying situation in Yemen... literally an inferno for many Yemenis."

Pro-government forces have also stepped up attacks on the rebels and last week retook the Red Sea town of Khokha.

A medical source in Yemen said Tuesday that 23 Huthi fighters had been killed in clashes with Saudi-backed government forces over the past day in Hodeida province on the Red Sea coast.

A military source said at least 14 pro-government fighters were killed in the same period.