RIYADH, March 26 (Xinhua) -- The Saudi Defense Ministry said on Friday that the kingdom saw a series of attacks from Yemen's Houthi rebels the previous day, including a projectile that hit an oil facility in the southwestern city of Jazan and caused a fire. 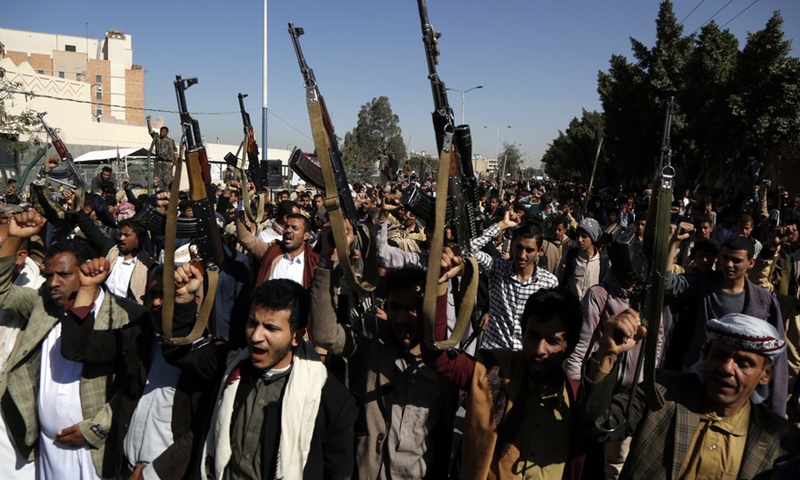 Houthi fighters walk in front of the closed U.S. embassy to protest against the U.S. designation of the Houthi militia as "a terrorist organization" in Sanaa, Yemen, Jan. 18, 2021. (Photo: Xinhua)

He said the recent attacks from the Houthi movement, which now controls the northern part of Yemen, show the militia group has no intention to accept any peace proposal to end years of bloodshed in the country.

The attacks came days after Saudi Arabia proposed a comprehensive cease-fire across Yemen under the supervision of the United Nations.

The kingdom will undertake all necessary, deterrent measures to safeguard its national assets and put an end to these assaults, the spokesman said.

Friday marks the sixth anniversary of the military intervention of the Saudi-led Arab coalition in Yemen.

Yemen has been mired in a civil war since late 2014, when the Iran-backed Houthis seized control of several northern provinces and forced the internationally-recognized government of President Abd-Rabbu Mansour Hadi out of the capital Sanaa.