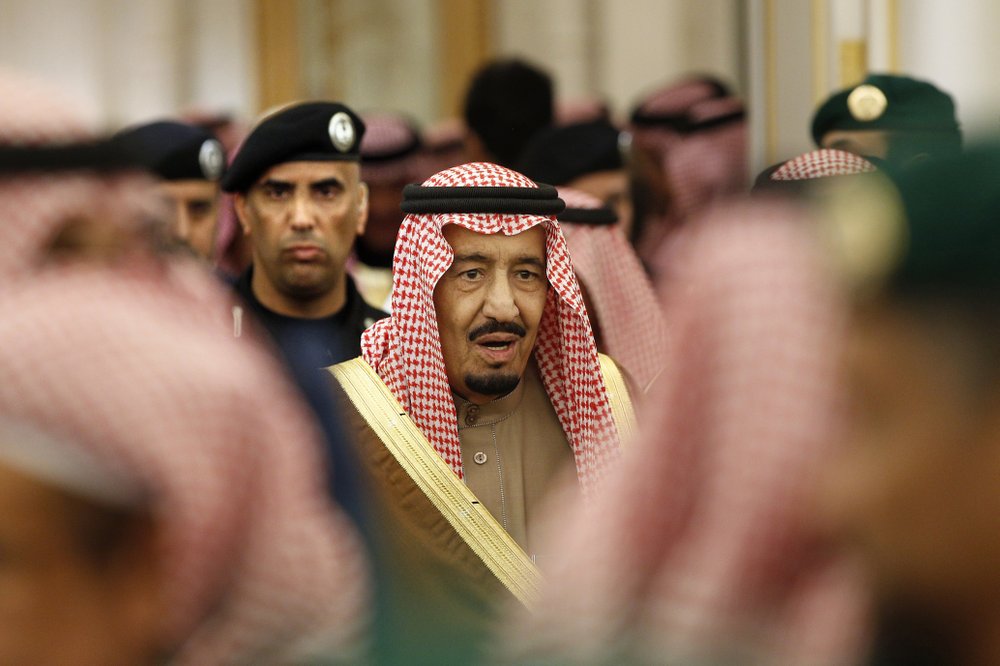 Saudi Arabia's King Salman is guarded by his bodyguard Maj. Gen. Abdulaziz al-Fagham, back ground, as he attends a ceremony at the Diwan royal palace in Riyadh, Saudi Arabia, January 24, 2015. Al-Fagham, a prominent bodyguard to King Salman was shot and killed in the Red Sea city of Jiddah, in what authorities described as a personal dispute, state TV reported September 29, 2019, offering few details on an incident that shocked the kingdom. (Photo: AP)

A prominent bodyguard to Saudi Arabia’s King Salman was shot and killed in what authorities described as a personal dispute, state TV reported Sunday, offering few details on an incident that shocked the kingdom.

Tributes poured in across social media for Maj. Gen. Abdulaziz al-Fagham, with many including images of the bodyguard at work. One included him bending down to apparently help tie the shoes of King Salman, the 83-year-old ruler of the oil-rich kingdom.

Others show al-Fagham in the background of events with both King Salman and his predecessor, the late King Abdullah.

Details remained vague. While officials posted condolences for al-Fagham, the first official word of his death came in a single tweet by Saudi state television.

“Maj. Gen. Abdulaziz al-Fagham, bodyguard of the Custodian of the Two Holy Mosques, was shot dead following a personal dispute in Jiddah,” the tweet read.

State TV offered no other details. Hours later, the state-run Saudi Press Agency said the dispute saw a friend of al-Fagham shoot and kill him, as well as wound another Saudi and a Filipino worker there. A gunfight erupted as security forces responded to the home that saw the shooter killed and five members of the security forces wounded, the news agency reported.

The daily newspaper Okaz, while offering no details on the shooting that led to his death, described al-Fagham in a headline as: “The Keeper of Kings.”

Officials in the kingdom did not immediately respond to requests for comment from The Associated Press.

Gun crimes are rare in Saudi Arabia, where strict Islamic law sees convicted killers and drug smugglers routinely executed. In 2017, there were 419 reported homicides, according to the U.N. Office on Drugs and Crime. Saudi Arabia is home to over 30 million people.